The Washington Post (WaPo) has launched a new architectural augmented reality series that will provide readers with an in-depth look at the details behind some of the world’s most innovative new buildings. For its first edition, architecture critic Philip Kennicott narrates an AR projection of the unique ceiling of the main concert hall at Herzog & de Meuron’s recently completed Elbphilharmonie in Hamburg, Germany.

“With this technology, we can insert news into a reader’s reality simply using a phone—no headgear or physical triggers required—to recreate state-of-the art physical spaces,” said Joey Marburger, head of product for The Post.

“Criticism has always been about robust description,” explains Kennicott. “But allowing the viewer to move around in a space of their volition is a game changer for architecture critics, and this is the first time we’ve had access to technology that simulates being present in the actual building.”

In the first story, the intuitive navigation guides you through the design behind the concert hall’s complex ceiling, composed of 10,000 unique panels parametrically generated to provide optimal acoustics.

To check out the AR feature for yourself, download the Washington Post Classic app from the Apple app store, then click this link to the story here. Then, simply aim your camera at the ceiling of any room you are in, and follow the steps that will appear on screen. The experience is currently only available for iOS devices.

The Parametric Process Behind the Hamburg Elbphilharmonie's Auditorium

Of all its bells and whistles, the focal point of Herzog and de Meuron's latest successful endeavor, the Hamburg Elbphilharmonie, is arguably the central auditorium, as explored in this new article by WIRED. An incredible example of the possibilities of parametric design, the hall is comprised of 10,000 individual acoustic panels that line the walls, ceilings, railings and balconies.

In preparation for their grand opening on January 11/12, the Elbphilharmonie Hamburg has released an interactive drone video that lets you experience the Herzog & de Meuron-designed building at two different speeds: adagio and presto (slow or fast). 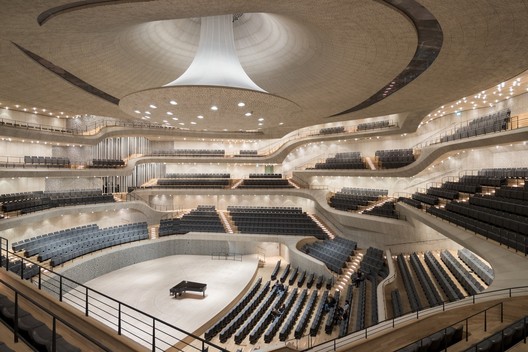