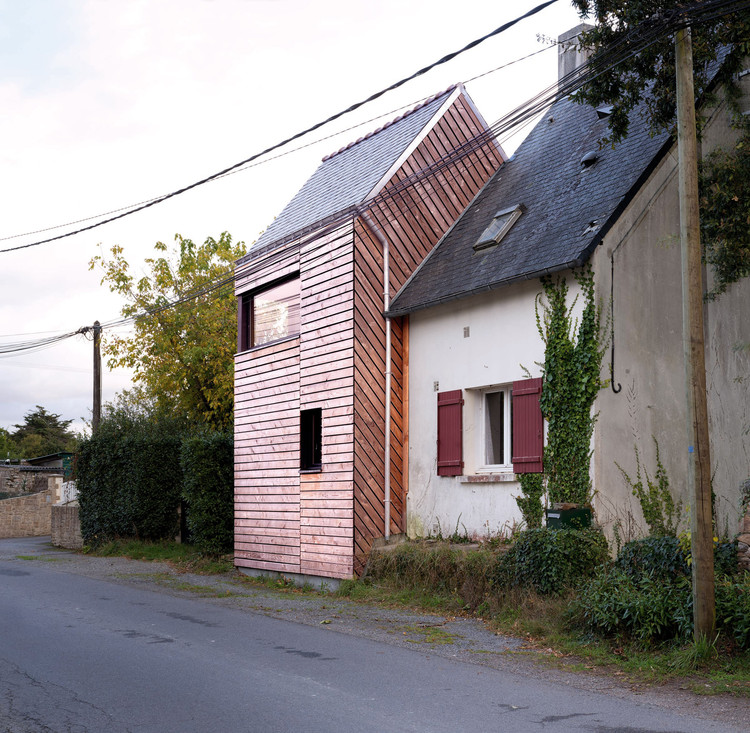 Text description provided by the architects. Located in a tiny village facing salt marshes on the French Atlantic coast, this wooden house extension is a modest holiday home and a writer’s retreat. The client idea for this project was born several years ago when saving a few old, massive oak beams from the demolition of a neighboring farm. The idea appealed to us but it was all we knew when we first visited the site.

A building plot has its own history. This plot was the site of an ancient traditionally built house of which only a single stone and cob wall survived, incorporated into a newer, unusual development. Standing on site for the first time, we found ourselves looking at a rather odd, amusing, tiny house. It seemed to be a narrow slice cut out from a volume midway between an oversized train model house and a common local dwelling. Moreover, given the building materials used, this surreal appearance was only mimicking traditional architecture while coming straight out from the seventies. This was the starting point of the project.

So how could we create a dialogue with this intriguing presence, especially so resonant with the habits of long daily usage? We rapidly set a goal: use the extension to create a view over the neighbour’s fence across the street, towards the sea in the distance and to place the owner writing desk in this pivotal spot. While doing so, we also wanted to open up the building, creating volume and bringing in precious sunlight and making its practical functioning as simple and easy as possible and everyday living a real pleasure.

This meant a complete interior remodeling of the existing house, particularly in relation to the new addition. Three different openings were put into the wall linking the two, reorganizing movement within the house. On the ground floor, the ancient fireplace was turned into a central spatial element, anchoring the domestic space. A circular path starts around the fireplace, passing towards the new extension, climbing a flight of stairs and through the mezzanine that takes in the landscape. Furthermore, on the first floor, the path returns to the ancient part of the house and reaches the two bedrooms, now the only private area, separated from the otherwise open volume of the house. The old oak beams at the origin of the project found an appropriate symbolic place by framing all three openings between the old and the new.

The old oak beams at the origin of the project found an appropriate symbolic place by framing all three openings between the old and the new. Technology was kept to a minimum in the hope of a reliable, long lasting and largely autonomous lifespan. The materials used are natural and locally produced: wood wool and cork for the insulation, Douglas fir wood with no chemical treatment either for the structure or for the cladding, zinc and slates.

The success of this project, despite its small budget, was achieved through a hands-on approach and constant interaction with the client and the artisan builders. In the end, satisfaction for all those involved in the project was the outcome of a comprehensive architectural solution that brought together comfort, light and view. 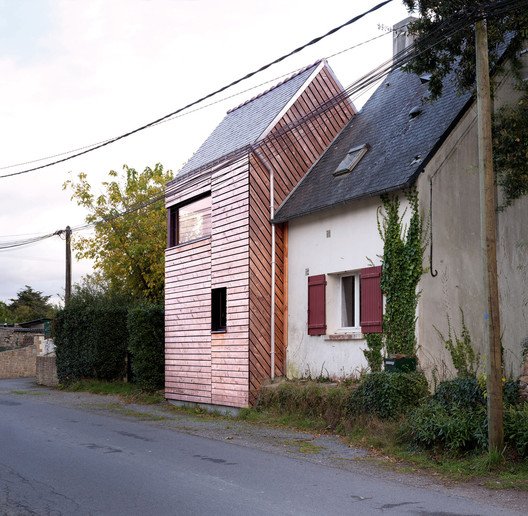