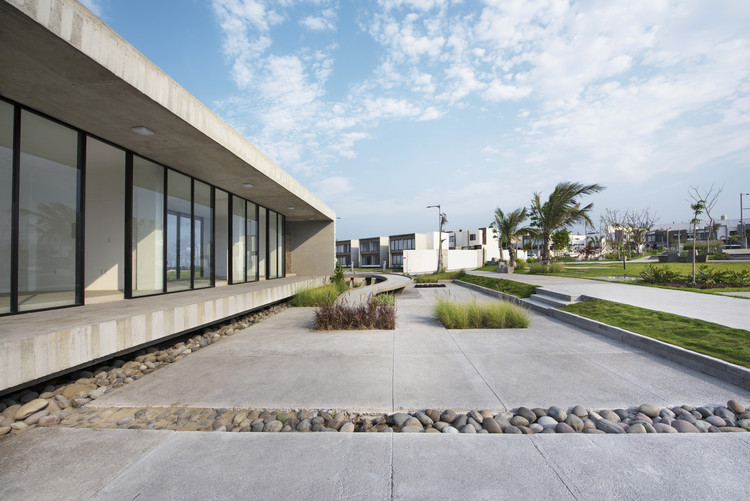 Álika Residencial is located on an irregularly shaped property with a total area of ​​48.24 hectares, located in the northern part of the city of Veracruz, Veracruz. It is divided into 5 stages, each of which is a super block with an indoor vehicular circuit with access control.

The first stage which is accessed from the road and through the neighboring subdivision, has a guardhouse with controlled access. There is also the showroom, our sales office, which sells with the innovation of its design and its green walls, fulfilling its urban landmark function by becoming the symbol of Álika.

Passing the access is the park, an extensive green area with species of native trees of the area, which were replanted of the same property. We have parking places, playgrounds, picnic area and a small lake.

The development has all the underground facilities. The design of the roads seeks to have fluid traffic at peak times, as well as concentrate public transport only to certain main corridors, in the same way priority is given to pedestrians and to the use of alternative transportation routes, such as bicycles.

The property is located within the urban spot of the north, its land use is housing in congruence with the surrounding developments, with an approved density of 4,000 homes, although in the current project of Álika have only 2,400 homes to offer Greater green areas and coexistence.

It is a location that has gained surplus value, as over the years large commercial areas have been developed with all services, schools, convenience stores, cinemas and squares within walking distance. It connects to the city center of Veracruz in a few minutes thanks to the fast communication routes and the availability of public transportation routes.

Currently, 7 different bus routes pass through the access of Álika.

In Álika, the topography of the building was an essential part of the design, since the unevenness ranges from +25.00 msnm in the lower areas to +60.00 msnm in the highest points, and a gradual fading with a maximum slope of 2.5% was achieved in the stages where metal mold is used. The movement of land was crucial for development, as it would be filled only with the land without adding more material. In the same way, the sanitary and pluvial network was designed respecting the natural rainfall of the terrain.

The profile of the users is mainly families with children under 10 years old, integrated of 4 people on average, there are also single people and older adults although in a lower percentage. The socioeconomic level of clients is in segments C and C +, in most cases they are people who are buying their first home or people who lived in the neighborhoods and identify the project as the best block in the north.