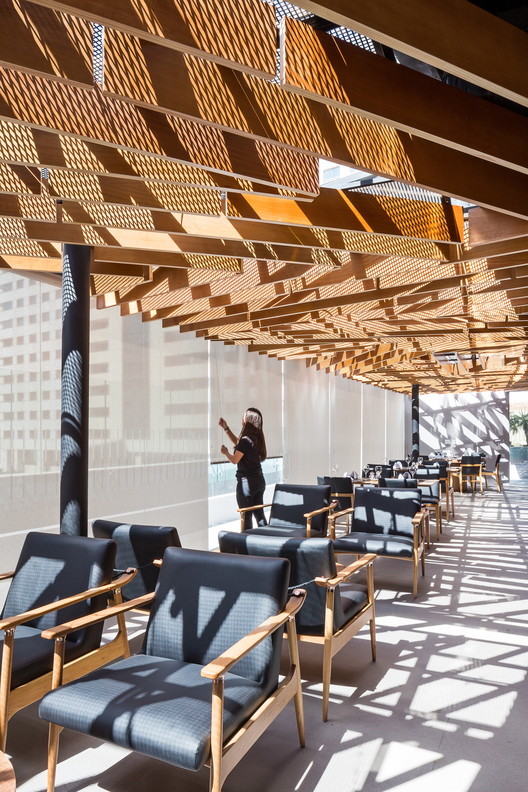 “The ceiling used to be decorative, a symbolic plane, a place invested with intense iconography. (…) Now, it has become an entire factory of equipment that enables us to exist, a space so deep that it begins to compete with the architecture. It is a domain over which architects have lost all control, a zone surrendered to other professions." Rem Koolhaas, Venice Biennial. This restaurant is located on the rooftop of one of the newest unit of an international chain hotel located in the centre of Brasília. This is a type of space that is often impersonal, where standardized characteristics are kept throughout its units all over the world. In this project, we were interested in exploring the tension between characteristics that could be understood both as undefined and specific in a hotel building. Therefore, the project aimed to stress the differences between its two main surfaces: the floor and the ceiling. The floor is neutral and impersonal. The ceiling has a specific design with a clear iconographic reference.

The floor: We created an extremely impersonal and “standard” floor plan, flexible enough to allow different configurations of layouts. We took advantage of the irregular geometry of the existing space to create small pockets of space defined by resulting corners. We expanded the space towards an outdoor veranda covered by a glass roof that lets the natural light in, creating different patterns of shadows during the morning. The materials that were used are different from those found in the building, however its similar dark colours allow it to be understood as a continuity of the hotel´s internal spaces. We used mostly neutral colours such as black and grey.

The ceiling: The suspended ceiling is made from natural Tauarí wood slabs, fixed on a steel grid that is clad with perforated steel sheets on the top of that, allowing the air conditioning to flow. The natural wood stand contrasts with its black background and the neutral colours of the floor. The design of the ceiling was based on an abstraction of an imaginary topography plan, which is a very specific way of registering a real topography of an existing place. By redesigning an imaginary curvaceous map using only straight lines we aimed to disconnect it completely from a real place. 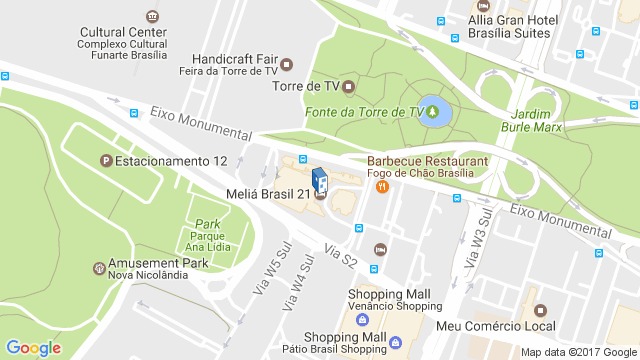