Save
From Superheroes To SuperMaterials: Five Super Materials With The Power To Change Our World
Share
Or
Copy

What's behind our current obsession with all things Superheroes, from the Marvel and DC comics spinoffs for TV and Film, to the more eccentric offerings on Netflix from the Wachowski’s Sens8 to the cosmic supernature of The OA? Critics see the classic superhero expressing the desire to re-establish order in the face of chaos (Batman/Joker) but some of our more recent superheroes are about the power of change, of remaking the world through a kind of ‘superempathy’. The power of the superhero depicted as an eccentric group of people reskilling with new forces and energies – think the aerobics-physics of The OA which invents and designs a new collective body and superpower and the transcultural/transtemporal superempathy of Sens8.

Something of this otherworldly capability of the new wave of superheroes is tangible at SuperMaterial exhibition at The Building Centre in London. It's about materials and the built environment, how these SuperMaterials will radically transform our relationship to the world around us through the superpower of material empathy, either adapting and changing to the environment, or being so efficient to produce and upcycle that they diminish the need to lay waste to the environment in the extraction of resources.

As SuperMaterial exhibition curator Lewis Blackwell says, “we are entering an era of rapid change in how buildings work. These new materials and processes can give us buildings with living skins, cleaning the environment and even generating food and power for themselves and us.” These new materials amplify the flow of life, create rather than destroy, operate within a wider ecological and economic vision of the planet rather than providing limited short-term solutions.

We are increasingly seeing the impact of the ‘Anthropocene’- the name given to the period of time in which human beings have had an impact on the earth's geology and ecosystem (see my interview with Jan Zalasiewicz and Mark Williams, Professors of Palaeobiology at the University of Leicester). We will need SuperMaterials as well as Superheroes to help make the ecology and of the planet sustainable for all living things.

There are some spectacular examples of materials in the show of very old materials being reconfigured in ways beyond traditional human capabilities – such as the grottos by Michael Hansmeyer and Benjamin Dillenburger, an example of what they call the ‘Digital Grotesque’, an incredibly ornate forms of 3D printed sandstone, that really has to be seen to appreciate its staggeringly delicate composition of brute mass.

And the stone table created by Webb Yates Engineers and Interrobang (with The Stonemasonry Company and Artisteel Ltd) which looks to be floating. Sophisticated engineering means the stone slabs are simply clipped together, resulting in thin structures that uses less than half the embodied energy, and less than a quarter of the carbon, of reinforced concrete (see the table in the foreground of the image below).

We know how badly polluted our cities are – but actually do we really? In 2017 it took only five days for London to exceed its annual air pollution limit. Created by BiotA Lab, at The Bartlett School of Architecture, University College London, their concrete enables the hosting of microorganisms and nurtures bio-colonisation.

Superpower: The organisms growing in the concrete produce oxygen and absorb CO2 and pollution.

The great thing about the SuperMaterial exhibition is that it demonstrates that superpowers can emerge like the tortoise who wins the race.  Take the humble coconut husk, 60 billion of them are discarded by the food industry each year – what an environmentally expensive waste. Not any more.

Superpower: The husk's high lignin content means it can be bound into incredibly strong hard board (made by GoodHout, Delft) without the damaging glue. The lack of glue means it can be fully recycled and less demand for wood and destruction of forests.

That step-counter on your phone? In the not-too distant future you could be step-counting the electricity generated round the house.

Superpower: Invented by Xudong Wang and Chunhua Yao at the University of Wisconsin-Madison, this floorboard made from cellulose layers generates electricity from footsteps.

“Is it a sponge? Is it foam? No it’s aluminium made by injecting air into molten metal!” The process means it has a high weight to strength ratio and has been used as external and internal cladding in major projects such as Fondazione Prada Museum/Gallery in Milan.

Superpower: Made by Cymat Technologies, the metal is fully recyclable and is itself made from 50% recycled materials.

All that microalgae in our canals and waterways were waiting for and the Urban Morphogenesis Lab, at The Bartlett, UCL. The algae is harvested and grown, the microbial cellulose derived from the algae can be spun in a fermentation process which metabolises organic waste and air pollutants, into layered structures. The harvested alga can also be used to grow bioplastic.

Superpower: Imagine you care about the environment and didn't have to wait, tapping your fingers on the desk for 200 years while your conventional petroleum-based plastic biodegrades. This bioplastic degrades speedily in six months. 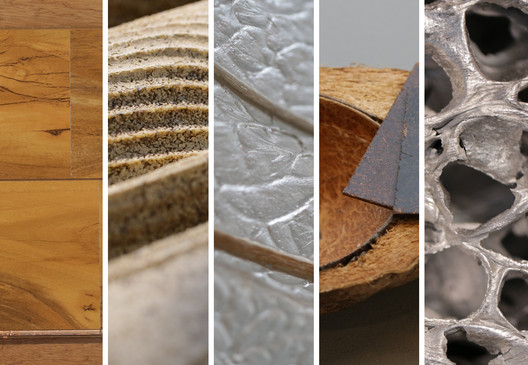