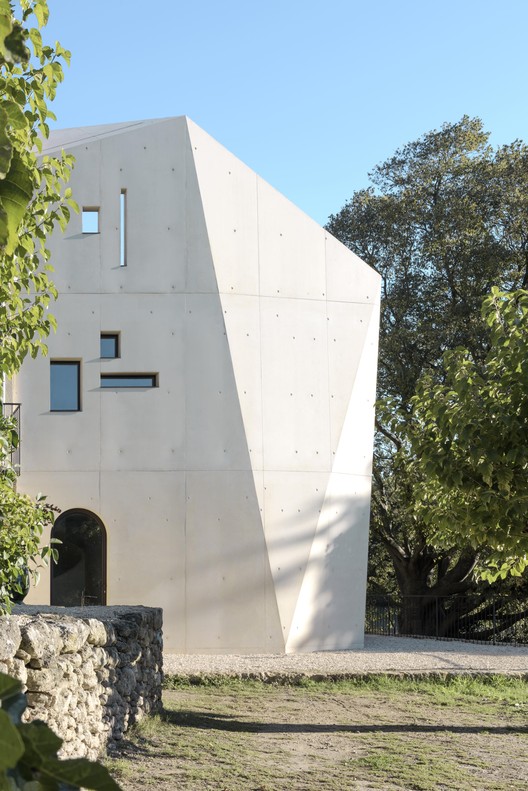 Text description provided by the architects. This typical house of the Gard, wedged in between vegetation and hillside, stands on a lot that has been separated into three levels of terraces held in place by dry stone retaining

The extension added to this house, which until recently only served as second home, had to enable Benoît and Roselyne to host their children, grandchildren and friends.

A monolithic and sculptural concrete volume rises from this landscape of greenery and limestone, resonating with the genie of this place, a former quarry.

This volume has been designed to allow the interplay of light and shadow to reveal its facetted form and to assert its presence and contemporary look without negating its kinship with the house it adjoins.

Like the existing farmhouse, the extension is laid out in two main, contiguous structures; the first, in the form of a square, of approximately 5 meters by 6 meters (within the range of current dimensions for small farmhouses in this region, the second, is rectangular and on a single level.

Narrow openings analogous to the farmhouses of the Usège region, are positioned on the east and south façades to protect the interior from intense heat in summer and cold in winter.

The wind known as the mistral, only allows for a few apertures on the north side, apart from the ones on the terrace, which recall the little openings traditionally found on the attic level placed there for the purpose of observing the migration of thrushes.

Given the dimensions, orientation, opening and physicality of the project, it blends right into the logic of the existing constructions. Its design transposes the archetypal codes of Provençal farmhouse architecture while reinterpreting the typological characteristics of the original house in a contemporary architectural style.

This house is a shelter that conveys a feeling of safety and protects its occupants from the sunny climate, intense sunlight but also violent storms.

Thus there is no or very little porosity between the interior and exterior and the openings are like screens, or photographic frames of the landscape. They create the sequence of the movements of the inhabitants, from private spaces to common areas and on to the terrace and gardens.

The additional spaces inside (bedrooms, bathrooms, living areas) and outside (pool, lower garden, levels of terraces, upper terrace on level 3) maintain privacy and the pace of life of each of the three generations gathered under the same roof.