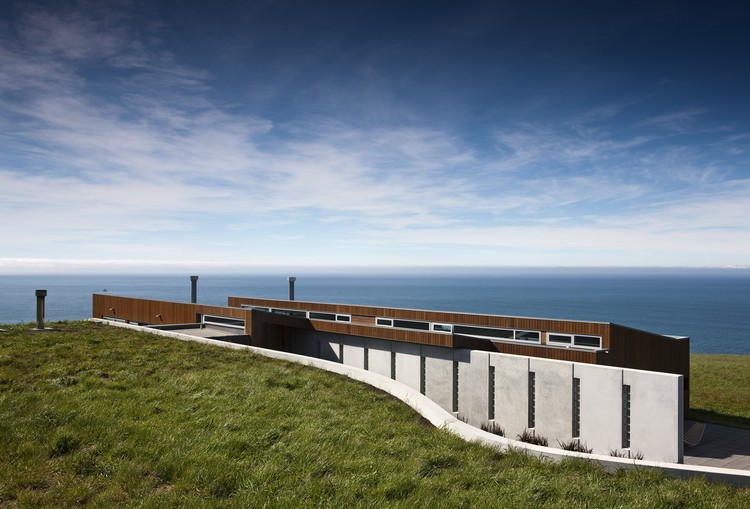 Text description provided by the architects. The house is located in a paddock above the sandstone cliffs along the south coast of Dunedin. The brief contained a number of requirements, the use of cedar as cladding, incorporate natural stone from the quarry 800m away, three bedrooms with the option of adding an additional bedroom at a later date and a three car garage that did not dominate the entrance area. A long curved retaining wall whose form is derived from the sandstone cliff face to the east carves through the site providing an anchor for the house and creates a series of sheltered courtyard spaces, it also accommodates the three car garage which is buried behind the wall.

The house runs alongside the retaining wall on an east west axis allowing for maximum sun exposure to the living space and key views to the east. The east cliff face view is most impressive from the living space and does not reveal itself immediately. The plan consists of three cedar clad boxes, each containing a different function, living, sleeping and utility. The cedar cladding continues internally fully encapsulating each box, creating intermediate spaces that are intended to be neither inside or out. The pre-cast concrete wall running along the hallway reinforces the axis of the house and extends to allow for future extension of the bedroom block. The local stone was used in a feature wall by the front entrance and as the aggregate in the polished concrete floor slab, another device to anchor the house to the site.

The sawtooth roof form opens the facade up to the north and closes it down to the prevailing southern weather systems, the gutter sections create a central storage spine running through the plan and an eave to the exposed south elevation. 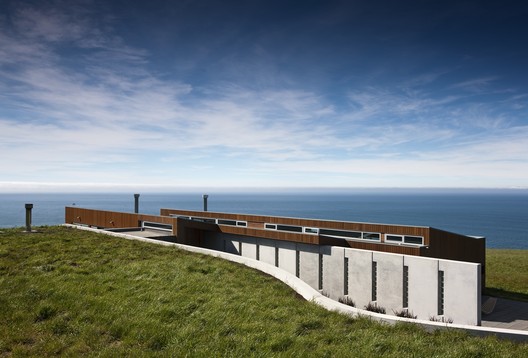