The Noguchi Museum has selected architect John Pawson and painter Hiroshi Senju as the recipients of the 2017 Isamu Noguchi Award. Now in its fourth year, the annual award was established to honor individuals who “share Noguchi’s spirit of innovation, global consciousness, and commitment to East/West cultural exchange.”

The award is presented each year to one architect and one artist or designer, honoring the multi-faceted career of artist/architect Isamu Noguchi. Previous winners of the award have included Tadao Ando and Elyn Zimmerman in 2016; architect Yoshio Taniguchi and industrial designer Jasper Morrison (2015); and winners of the inaugural award, Norman Foster and artist Hiroshi Sugimoto (2014).

Internationally acclaimed architect John Pawson was recognized by the museum for his wide range of work, from private homes to retail showrooms, from monasteries to yachts. Having spent four years working in Japan under the tutelage of designer Shiro Kuramata, Pawson’s work draws from a variety of traditions united through a strict minimalist approach.

“Pawson’s work continues to grow out of the expressions of simplicity that have formed a consistent component of both Eastern and Western traditions, from Japanese concepts of Zen to Cistercian monastic architecture,” the museum notes.

Recent projects by Pawson include the the Feuerle Collection in Berlin and the renovation of Design Museum in London, which was recently named to the 2017 RIBA London shortlist.

Japanese-born painter Hiroshi Senju was selected as a recipient for his “sublime, frequently monumental images of waterfalls and cliffs that combine a minimalist visual language that is rooted in Abstract Expressionism with ancient Japanese painting techniques.”

“He is one of a handful of contemporary masters of the 1,000-year-old nihonga style of painting, using pigments made of minerals, ground stone, shell, and corals suspended in glue made of animal hide,” the museum explains. “Senju creates his waterfalls by pouring paint onto mulberry paper on board, conjuring not only the appearance of rushing water, but also its sound, smell, and feel. Senju was the first Asian artist to receive an Honorable Mention Award at the Venice Biennale (1995).”

The Award will be presented to Pawson and Senju at the museum’s annual benefit on May 16.

The Noguchi Museum has selected Tadao Ando, alongside artist Elyn Zimmerman, as recipient of the third annual Isamu Noguchi Award, "given to recognize individuals who share Noguchi's spirit of innovation, global consciousness, and East-West exchange."

25 The church of St Moritz has been through many changes since its foundation nearly a thousand years ago. Devastating fires, changes in liturgical practice, aesthetic evolution and wartime bombing have each left their mark on the fabric of the building. 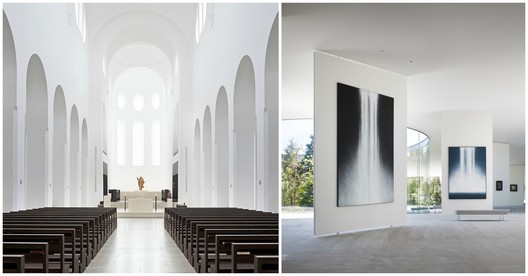