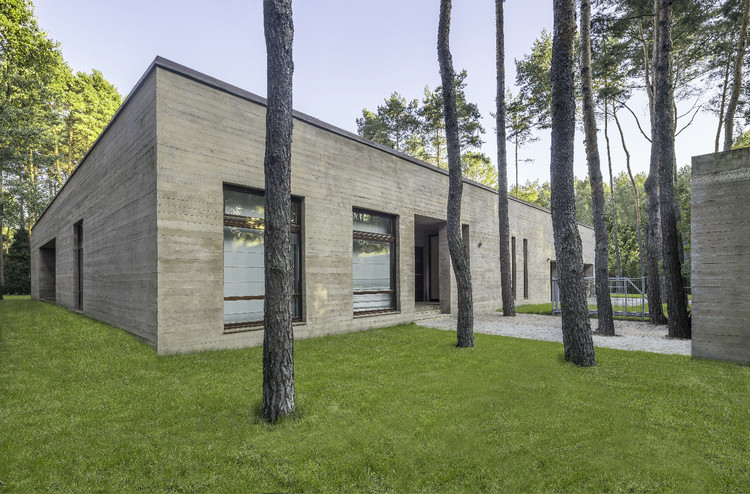 Text description provided by the architects. Concrete is considered to be the largest usage of architectural concrete in the European residential architecture.

Located at the gates of the city of Warsaw, sinking in a pine forest, Izabelin is a beautiful enclave in the Kampinoski National Park. It is where an exposed concrete residence has been built.

The building’s design fits into an architectural trend of discretion. Looking for an idea how to enable the house to ideally blend into the landscape, which is determined by a huge pine forest, Rafał Barycz and Paweł Saramowicz from Barycz & Saramowicz Architects have concentrated on planning and design of the villa and then its external envelope. The house made of exposed concrete is challenging, aimed to draw the space in and focused on its interior. The building has been tailored to a sophisticated client.

The essence of innovation of this building is that its very wide functionality could imply an extensive multi-wing approach, whereas quite the contrary has happened. Substantial utility functions have been closed in a nearly square contour, with separate hollowed areas of an atrium, summer dining room and the main entrance. The house has been designed on a geometrically strong square plan, which is determined by a symbolic defensive wall. Since the archetypal wall should be built of stone, a modern stone equivalent has been used here - raw concrete with organic prints of the formwork. According to Barycz and Saramowicz, concrete as a wall material gives a strong character to its form, just like stone, and is also the language of the contemporary architecture.

The nature is both an inspiration and a model here, and in a sense it is also a material. From a semantic and functional perspective the house has been designed as a kind of an architectural mirror in which genius loci reflects. Architectural exposed concrete with natural prints of formwork has been used, dyed with powdered ochre to the colour of pine bark. The upper floor has been covered with elegant highly processed wooden panels. Such a material composition has emphasized the identity of the place.

Thanks to covering quite a large building with exposed concrete, a uniform coating of the construction has been achieved. Combined with the reduction of unnecessary ornamentation, it creates a modern silhouette with an incredible force of impact. This is the largest application of exposed concrete in the history of the Polish architecture. According to Barycz and Saramowicz, together with the development of architectural thought, finesse in architecture is sought not only in a form sculpture but also in an innovative material coating.