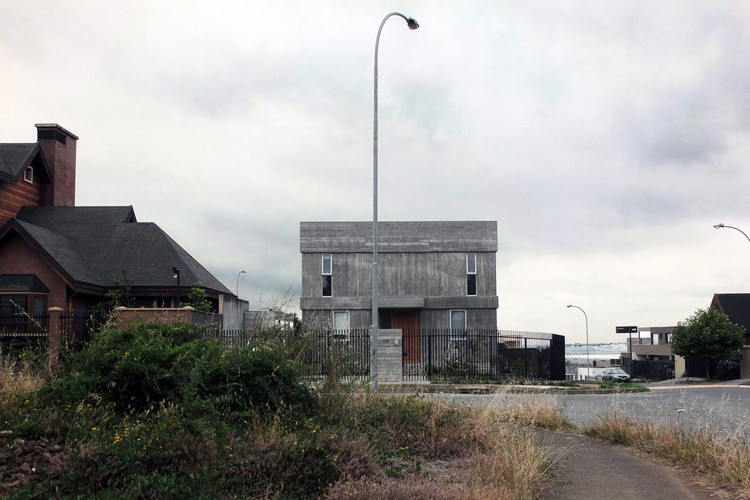 Text description provided by the architects. This house is located in a neighborhood in the process of consolidation of San Pedro de la Paz, a commune near of Concepción.

The restriction  of a   square plant (9 x 9 meters) is the context in which the project is developed. A central aisle with a dimension between enclosure and corridor defines the spatial structure that organizes this house. In its geometric center a skylight floods of light both levels crossing the floor of the second level. For this soil, flat steel bars were used, reminiscent of the urban gratings that conceal the installations and an unknown surface of the cities. On this structure, in the center of the dwelling, the experience can be of weightlessness or vertigo, the sensation is tensioned with the skylight that accompanies in concordance.

From this weightless lobby you can access the most intimate rooms of the second level. In the first floor, a perimeter circulation is added to the central aisle that communicates the kitchen with the dining room and the principal livingroom with the familiar, livingroom being drawing an orbit. This double circulation generates new relations between the enclosures, trying to overcome the boredom of a compact house.

The formal result of this house is an exercise in geometry and proportions. The outer beams are slightly overflowing from the lead of the walls and their heights go beyond the stresses of static, the will upon them is visual and tectonic. All the work is conceived in reinforced concrete, in the interior have covered some walls with brushed boards of pine to butpe, like a smooth skin, complementing the tactile experience against the stone condition of the concrete.