Text description provided by the architects. The "Chilean House" is defined by a series of constructive and architectural elements. Corridors, patios, bases, zaguanes, double paths, etc. corresponds to thermal and domestic solutions that explain its shape and location. These elements were part of the initial requirement of this project as it is a valid option to inhabit the area. Then, came the architectural intention of making these pragmatic génesis elements include the senses, time and geography in the project.

The first operation defined a square plant around a courtyard artificially closed by 3 of its sides and geographically confined by the Andes Mountains. This patio is hard on its pavement (clay tile) and is hard on its enclosure (glass). Everything on a plinth of 60 cms. which removes the inexhaustible moisture from the ground and raises the house in search of the mountains.

The tile in the ground turns this patio into an oasis for its quality of being a surface (in 160 ha.) that does not raise dust in summer and is not mud in winter. This hardness is complemented by a floodable strip that generates a mirror of water that replicates the Andean horizon from the interior and serves as a thermal stabilizer in the months of extreme heat. The enclosures of the 3 artificial sides are made up of glazed galleries that are backlit much of the day, this generates the reflection of the environment and therefore the inclusion of the orchard in the patio extending the organic and geographical horizon. This reflective condition of the courtyard in 4 planes also serves to contain domestic privacy by hiding the interior of the house.

From the inside the perception is different, the glass sifted by the structure of wooden pillars allows a panoramic transparency of the house that shortens the distances of the maximum paths and manipulates the time perception in the displacements. The internal connection of the bedrooms maintains the intimacy of the house and promotes an independent thermal operation. This factor is relevant considering the climatic polarity of the area with an oscillation in the thermal sensation of more than 30 ° C between winter and summer.

An absolutely movable window in the living-dining room dilutes the boundary of the enclosure in the summer months and justifies the reticulated beam that covers a light of almost 12 mts.

The geometry of the ceilings is distorted to enhance the presence of the mountain range and a regimen of metal cladding liners interrupt the texture of the tiles to complement the lighting given by the gaps of measures dimensioned in the bedrooms. The interior light of these windows is sieved by a dense repetition of interior trusses in view. 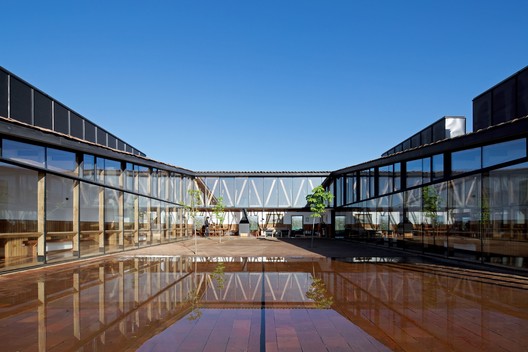