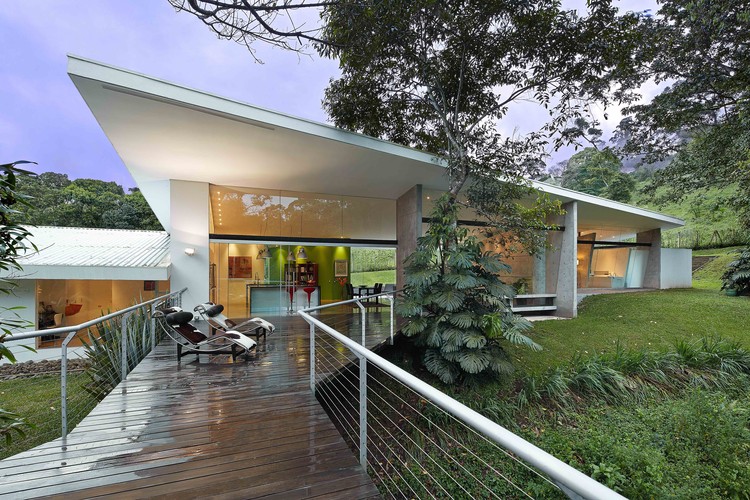 Text description provided by the architects. Casa Yos owes its name to the existing tree which we surrounded by a deck, turning it into a focal point of the house’s composition.

The main intention of the design is quite simple and straightforward: to enjoy the forest that serves as a garden for the house.  Consequently, we designed an elongated construction in which every area of the house could have a view of the forest reserve.

The distribution of the spaces inside the house was done according to the owners’ instructions: an ample social area that includes a dining room and living room, and the very important kitchen. Also included in this area is an open-air terrace.

The bedrooms are located on opposite sides of the construction: the parents’ bedroom is on one end and the children’s bedrooms are on the other end. This creates three distinct areas in the house.

We took advantage of a slight grade slope in the terrain to build in smaller grade slopes that could work as transitions between the three areas.

The roofing scheme responds to two basic criteria: the desired scale of the spaces and the visual aperture to the forest.

The house has two separate roofs : one large roof that originates in the main bedroom and rises up to it’s highest level over the terrace in front of the kitchen. This inclination, together with the grade slope on the floor, allows for an appropriate floor-to-ceiling height in proportion to the scale of a bedroom, even though the same roof yields a  larger scale in the social area. This roof has an ascending inclination in the direction of the forest in order to integrate the forest within the house. This effect is reinforced by the inclined window panes , which is another suggestion by the owners. The second roof, which stretches over the other bedrooms, has an inclination in the opposite sense, which reduces the scale and aperture of the space to accommodate the children.

The focal point of the house – and the space that is most frequently used by the family – is the wooden terrace.  Access to this area is through sliding glass doors that integrate the terrace with the kitchen and everyday activities. El Yos tree is a reference point that creates a space of its own within the terrace. 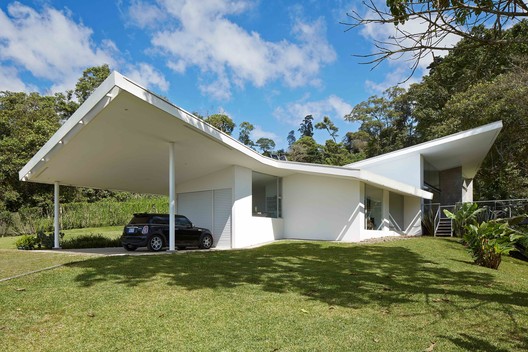