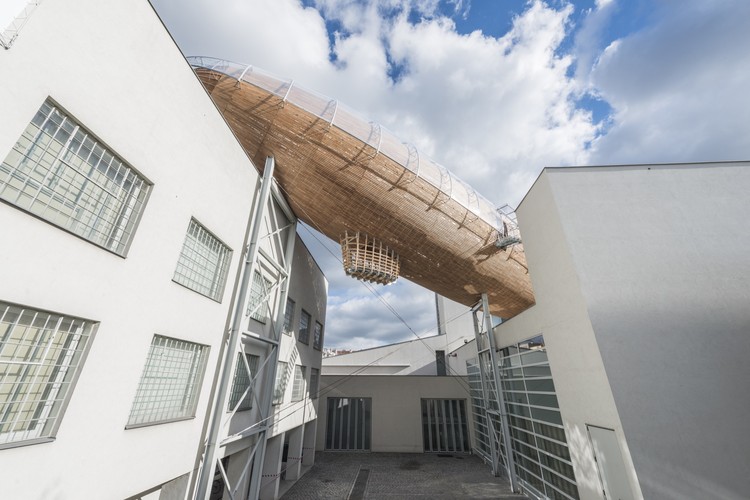 Text description provided by the architects. A giant airship is rising over Prague
A unique monumental architectural intervention, inspired by the elegant shapes of early 20th century airships, is growing on the rooftop of one of the largest contemporary art spaces in the heart of Europe. The 42 meter-long steel and wood structure will become a new permanent space for literature at the DOX Centre for Contemporary Art in Prague, Czech Republic.

In 2008 the DOX Centre for Contemporary Art in Prague first opened its doors to the public as the result of a private initiative by its current director, Leoš Válka, and his partners. The reconstruction of a former factory into a multifunctional space was soon nominated for the prestigious Mies van der Rohe Award, and for the past eight years the institution has continued to fulfil its mission: to create a space for research, presentation, and debate on important social issues, where arts in dialogue with other disciplines encourage a critical view of the so-called reality of today’s world.

The construction of a giant wooden airship “suspended” above the DOX Centre is yet another testament to Leoš Válka’s personal conviction that is reflected in the DOX Centre’s overall philosophy: that even in today’s fast-paced, globalized world where nothing that cannot be calculated, evaluated, or predicted is worth risking for, “things can be done differently.”

“The idea to invade the DOX Centre’s starkly modern austere concrete-and-glass architecture with a ‘parasitic’ structure has been on my mind for several years. I first dreamed of an absurdly fascinating organic shape that would contrast with the DOX Centre’s existing architecture,” says Leoš Válka.

In 2013 he invited internationally acclaimed architect Martin Rajniš, the 2014 winner of the Global Prize for Sustainable Architecture, to join him in realizing what he calls “a dream of 12-year-old boys.” For more than two years together with wood and steel specialists they have been working on the design of what finally turned out to be a 42 meter-long and 10 meter-wide structure inspired by the shapes of the giant airships that began to cruise the skies at the dawn of the 20th century.

The shape of the zeppelin is symbolic. The early zeppelins represented the optimistic ideals of a new era of unprecedented technological advancements. With their remarkable monumentality and hypnotic dignity that would continue to fascinate generations to come long after they had vanished from the skies, they have always embodied the eternal human desire to fly, and have represented a certain utopian ideal.

The airship is to bear the name of one of the most famous characters in utopian literature. Gulliver will serve as a space for reading and public discussions of literature – fiction, poetry and critical writing – related to the themes of DOX’s exhibitions, which typically offer a critical view of particular aspects of the contemporary human situation. 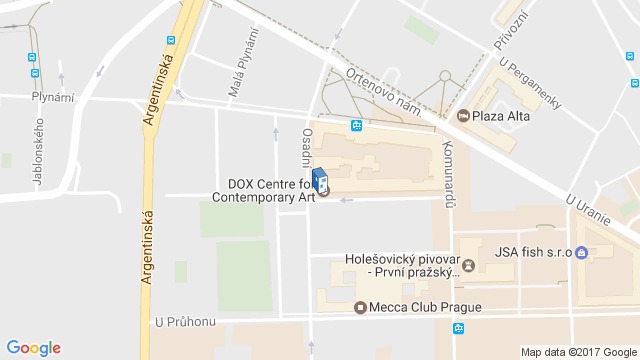 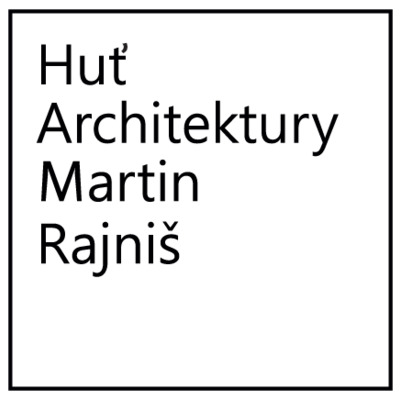