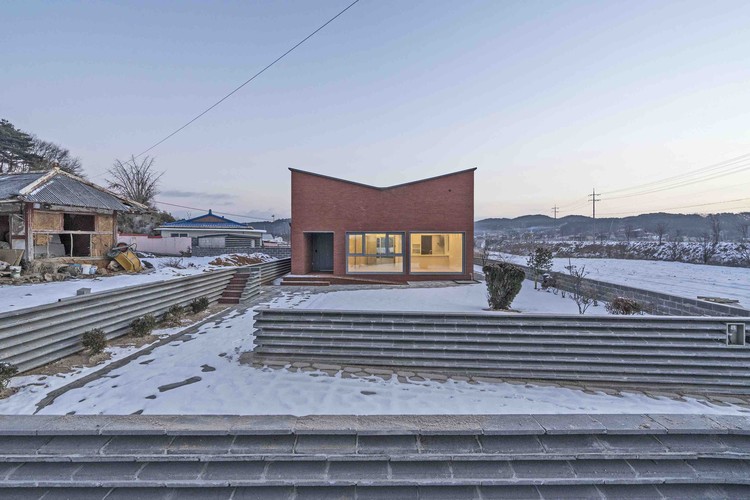 Text description provided by the architects. The owner of the house had been injured from a car accident in his teens.

Since the accident, he was forced to spend much of his time in bed and during these long hours, the only thing in his view was the old ceiling and lamps of his old house.

Perhaps it was because of the wind and snow on the western coast island, the roof of the house was low and the house had a long eaves. The owner always had the lights on in his room, it being dark from the lack of sunlight through the windows. The house was cold during the winter and humid during the summers due to the poor insulation. Even the bathroom was cold and dark, making it even more difficult when a helper assisted the owner in washing himself.

More than these physical discomforts, what the owner disliked most was the difficulty in communicating with his family. Because the house was composed of hallways, it was hard to catch sight of his family from his room. On the days his siblings and his nephews and nieces visited, he could only hear their presence through his ears. He regretted that he could never see his nephews and nieces play in the living room or out in the yard.

Finally, the owner decided to give himself a gift. A gift of a house that was warm and bright with sunlight all day long. A house that had a view of the sky, instead of lamps. A house where his family was visible right from his bed.

The owner lived with his mother and father, and his grandmother lived in the house right next door. All he wanted was a house with enough room for the three of them with a small room on the second floor for his siblings and nephews and nieces when they visited.

During the design process, the issues he pondered most was how to build a southeast-facing house that would be bright all day long without having to turn on the lights, and how he would have a view of the yard and garden from inside the house. In short, he wanted an open house that was well connected to the sunlight and external surroundings.

The house would be composed of a living room at the center with a hallway that was connected to everything in the house, and this area would create a path to the yard in four directions. Thus, the house had no visible dead ends, was always connected to the surroundings, and sunlight would saturate the entire house thanks to the reverse gable roof structure.

In order to insulate, heat, and adjust the humidity of the house through high ceilings, the house used an external insulation and warm-roof method where the lower level of the house was made of reinforced concreted, while the upper level was made of a lightweight wood frame. In order to resolve the issue of the reverse gable roof structure, steel truss was used to disperse the weight of the roof that was concentrated in the middle.