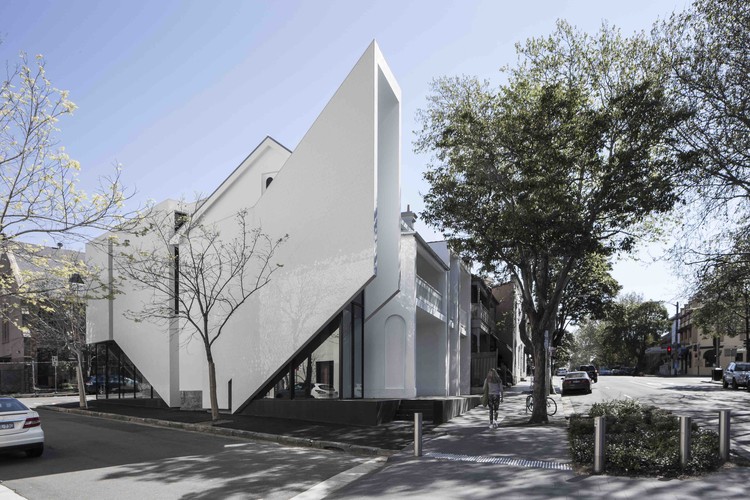 Text description provided by the architects. On a prominent corner in Surry Hills, Crown 515 presents a dynamic form to the street, reinterpreting the traditional terrace in a contemporary design of angular shapes and shimmering tessellated tiles.

A large ground-floor commercial space is envisioned as a restaurant, destined to be part of the local food scene, while five apartments on the upper two floors offer bespoke residences.

The character of the building is formed by two distinct but related architectural gestures that create a dialogue on either side of an existing free-standing terrace house, making use of an empty block to one side and a small triangular parcel of land on the other.

Derived from the pitched roof forms of the surrounding structures and with a conscious nod to the vertical portals of the adjoining terrace typology, the architectural language of the building represents a challenge to the conventional terrace row. Viewed from Crown Street, the acute angles of the southern facade exaggerate the perspective of the corner site, lifting up to reveal an active public corner.

This facade is clad in gloss white tessellated mosaic tiles that reflect and refract their surroundings, catching and amplifying the southern light. Along the row, in the new infill terrace, the same tiles line the internal reveals of the portals, offering a consistent yet distinctive character to the external finish of the building.

The design ‘gives back’ to the street by creating an outdoor dining terrace, raised comfortably above street level but still very much a public zone. Paired with the promenade along Crown Street, this creates a social space the transitions smoothly into the Surry Hills context.

The restaurant is accessible from both Crown Street and Miles Street to the rear, allowing flexibility of use, while the tiled southern facade lifts up at the corner to reveal a secondary entry point, subtly activating this corner of the site. This portion of the building recognises the scale of its neighbours with a tall street wall, punctuated by only one strip window above ground floor. The two facades to High Holborn Street are unpunctuated by openings, with strong, graphic elevations that offer the strength of form required to balance prominent architectural neighbours Hiscoes Gym and St Peters Church.

An infill terrace to the north of the site connects the heritage building to its northern neighbours, continuing the familiar vertical rhythm of rectangular forms cut with residential balconies. Infused with the Surry Hills character, this bespoke, contemporary interpretation of a classic building type features proportions and function driven by the terrace typology.

The residential entry to the building is completely removed from the site’s commercial activity and is located at the rear of the development on High Holborn Street. Residents access each of the five apartments over two floors via a central stair and lift.

The apartments make clever use of the existing terrace, retaining its key structural walls and weaving space around them. Apartments to the west feature large north-facing balconies with the privacy of a rear lane aspect, while the more lively Crown Street-facing apartments make use of existing and new terrace balconies. Individual apartments also boast design features: apartment three has a large window revealing the tall raked ceiling of the dining room, and the upper-level eastern apartment features a very large deck, set back to avoid street presence and offer acoustic privacy.

The building observes the fundamental principles of energy efficiency and sustainable design. Thick composite walls provide insulation from outside temperatures, while windows with recessed reveals provide natural light without excessive heat gain. Generous ceiling heights permit plenty of solar access in winter and exclude hot sun in summer. The strategic placement of operable windows reduces the reliance of interior spaces on air conditioning, and further engages the building with its site. 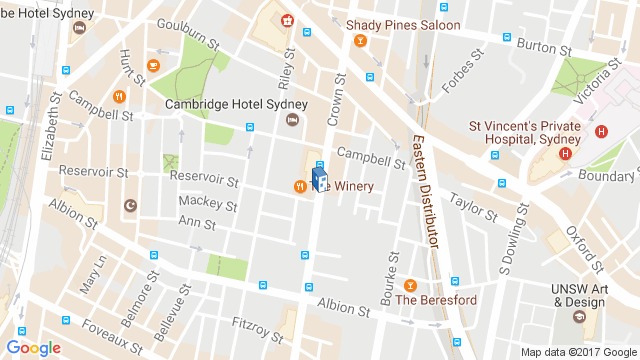 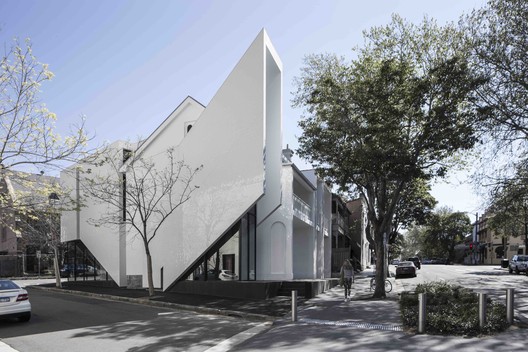