It is difficult to imagine how the serene curves of the Al Shaheed Monument, reflected in a glimmering lake in the ancient city of Baghdad, could have been built in a time of conflict and genocide. Commissioned by Saddam Hussein’s regime as a memorial for the fallen soldiers in the Iraq-Iran War of the 1980s, this graceful structure exudes a quiet beauty that belies the turmoil of its birth.

Several factors contributed to Iraq’s invasion of Iran in September of 1980. Foremost among these were the territorial ambitions of Iraqi president and dictator Saddam Hussein, who wished to take control of the oil-rich Khuzestan region in Iran. He was also acting in response to supposed Iranian attempts to incite his own nation’s Shiite Muslim majority to rebel against his regime. Within a year Iraqi forces had been repelled by Iranian forces, and the two combatants settled into a stalemate that lasted seven years. Iran was now determined to fully defeat its would-be conqueror, and only the deleterious effects of the conflict on its economy could finally drive the country to accept a ceasefire, which was negotiated by the United Nations, in 1988.[1]

The Iraq-Iran War coincided with the latter end of a period in which the revenues from Iraqi oil exports were devoted to the construction of monuments and memorials in the capital city of Baghdad. These structures, ranging in scope from small fountains and statues to colossal triumphal arches, were built to commemorate the country’s victories at war; in many cases, these architectural celebrations preceded the ends of the conflicts that prompted their construction. It is not unusual, then, that the monument built to honor Iraq’s fallen soldiers in the war against Iran was opened in 1983 – five years before the ceasefire which would bring the bloodshed to a halt.[2]

Despite its military inspiration, the Al Shaheed Monument contains no obvious martial imagery. Designed by Iraqi architect Saman Kamal and sculptor Ismail Fatah al Turk, the monument takes the form of a towering arabesque pointed dome, 40 meters (132 feet) tall and covered in turquoise tile. The dome is split in half down the center, with the two halves hollowed out and offset from each other; one half shelters a circular cascade and pool, while the other protects an eternal flame dedicated to the martyrs of the war.[3] The structure stands on a circular platform 190 meter (623 foot) diameter platform at the center of an artificial lake. Underneath the platform is a two-story complex comprising a museum, library, lecture hall, cafeteria, gallery, and support facilities.[4]

Although the form of the monument was Iraqi in origin and development, it was the international firm Ove Arup & Partners—noted for, amongst other projects, their work on the Sydney Opera House—that devised the galvanized steel framework which supports the monument. The glazed tile exterior is cast in carbon fiber-reinforced concrete, further strengthening the structure. Between the artificial lake, artificial island, and the massive landmark at its center, the project cost Iraq approximately $250 million before its opening in 1983.[5,6]

“In the era of the Leader-President, Saddam Hussein, leader of the revolution and the people, the Iraqi Republic has achieved security of life for all Iraqis, so that they may enjoy honor, freedom and civilizational advance in all areas.” Hisham al-Madfai, the consulting engineer who drafted these words for the Al Shaheed Monument’s opening in 1983, was imprisoned shortly afterward for technical failures in the concrete which made up the slab on which the bisected turquoise dome stood.[7] The incident underscored the irony of al-Madfai’s words, which spoke of security of life in a regime which would later target its own Kurdish civilians with chemical weapons.[8]

Although Saddam Hussein’s dictatorial reign has since been brought to a forced end, many of his monumental projects still stand in Baghdad as silent but potent reminders of the fallen regime. As Iraq continues on the rocky and uncertain path toward a new national identity, the question of what these structures mean to the country remains. Only time will answer whether the Al Shaheed Monument will be irrevocably linked to the tyrannical figure behind its creation, or if the elegance and grandeur of its form will transcend its origins and allow it to earn the lasting admiration of the Iraqi people. 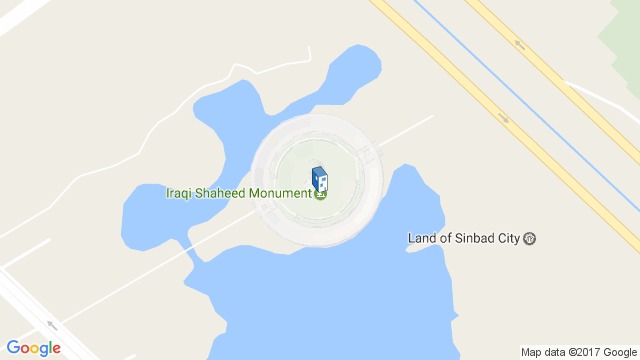 Location to be used only as a reference. It could indicate city/country but not exact address.
Share
Or
Copy
About this office
Saman Kamal
Office
•••