Save
House in the Dune / Luciano Kruk 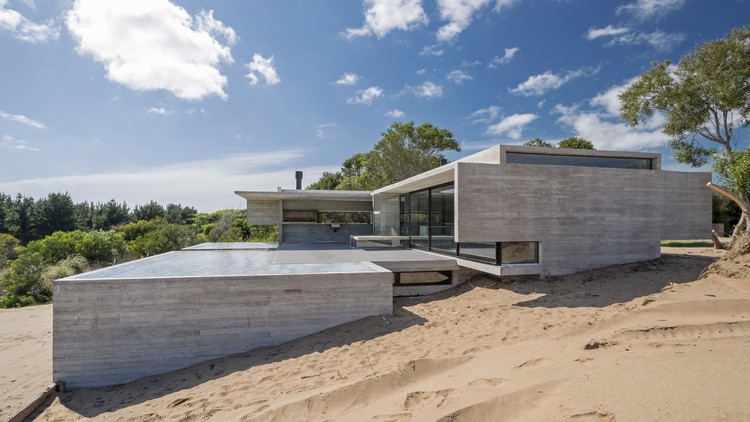 Text description provided by the architects. The House in the Dune is located in The Coast Disctrict, in a seaside neighborhood 13 km north of the city of Pinamar and four hours away from Buenos Aires.

Lying on a curved cul-de-sac, the site is a trapezoid with its widest side at the back. Originally, even though it lacked tree vegetation (particularly pines, which are typical in The Coast District), the land seemed impenetrable, completely covered as it was with acacias.

Following the topography of the area, characterized by the natural sandy dunes, the terrain is plain towards the street and slopes downward steeply until it turns plain again near the back.

The client commissioned a typical summer house for him and his family, but he also requested that the house should accommodate standard uses to allow it to be rented out. The most prominent space in the house should be the social area. Connected with the unified dining and living rooms, the kitchen should be spacious and communicate into a semi covered space housing a grill and belonging to an outdoor area that allows the living room and dining area to expand into the exterior. Regarding the private areas, three bedrooms were commissioned: one en suite master bedroom and two secondary bedrooms separated from the former, sharing a bathroom. It was decided that the house would be materialized in exposed concrete, due to its zero maintenance needs.

The Studio’s proposal was to organize the program into one architectural object that would integrate harmoniously into the site’s topography with as little environmental impact as possible. The house would merge into its surroundings by following the terrain’s natural forms and through the partial burying of its volume under the slope.

As houses in the area can be relatively close to one another due to the parcels’ organization, it was decided that the setback should be expanded beyond the minimum required by the building code so that more air and privacy could be gained. This wider setback, the mostly blind side walls, and the facades’ permeability both at the front and the back made it possible to achieve a space configuration that is private enough and that provides shelter from the outside views, which would undermine the house’s intimacy.

Set at the highest level of the site, the access floor houses the social areas. With uninterrupted views from the front backwards, it opens into a deck over the slope that overlooks the green lung at the back of the site and, at the same time, shelters the private uses floor that lies beneath.

Two staircases (one inside, linking the social and private areas, and one outside, linking the deck and the woods beneath) set on the same line define an axis for vertical circulations around which all spaces are organized. While on the upper floor it emancipates the living room from the kitchen-dining area-grill chained spaces, downstairs it separates the master and secondary bedrooms according to what the client asked for.

The longitudinal, open views from the rear of the upper level display the surrounding acacias in the foreground and the distant pines in the valley behind. Located at the lowest part of the site, the bedrooms open directly into the green lung through semi covered private expansions, establishing a continuum with the natural surroundings.

The outer stairs slide between two big concrete boxes, one containing a swimming pool and the other, a garden, and both of them linked to the deck into which the social areas open. The water, the earth, and the vegetation contained in these boxes help insulate the bedrooms beneath.

In addition to the insolation control provided by the upper floor’s expansion, the semi covered area of the deck, and the overhangings that reduce the sunrays’ incidence on the glazed surfaces, the house was also equipped with Split air cooling systems and heating through a wood-burning stove and radiant floors.

The esthetic proposal shows at once both the complementarity and the contrast between the exposed concrete’s noble expression all over the house, and the refined details of the anodized aluminum framing, the glass, and the smoothed concrete floors.