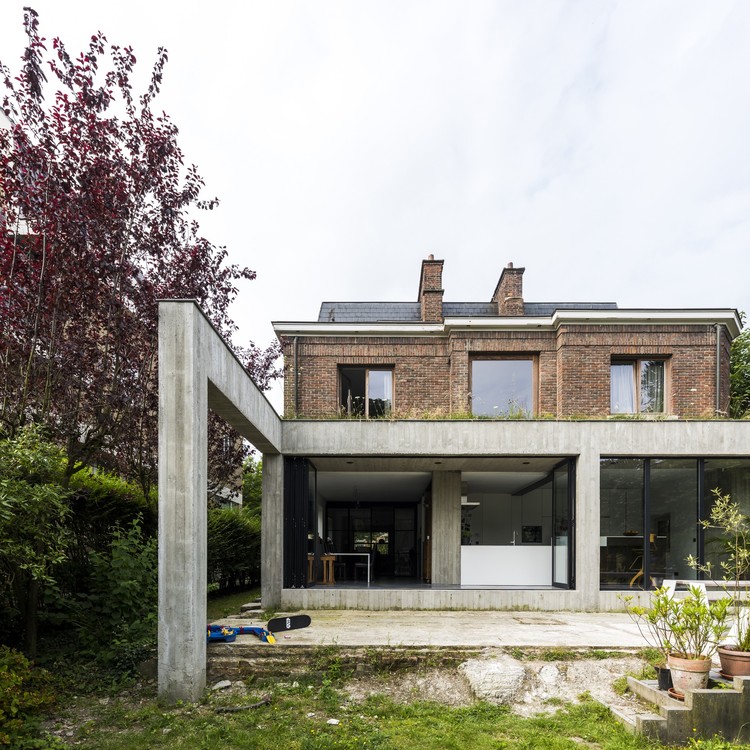 Text description provided by the architects. Essentially, the detached 3-level house, originally built in 1936, asked for a thorough reconversion. A hotchpotch of rooms, most of them low on natural light, made the house lack spatiality and gave it a rather closed, introvert feeling.

However, it was the habitable area of 470 m², the garden and the location in the residential area of the city center of Ghent, quiet but close to traffic interchanges, that persuaded the owners to buy this property. Bringing daylight into the house and creating a link with the garden was the first requirement, next to adapting the outdated house to contemporary living standards.

The owners, a family with three playful boys, love spending time outside and like to have a barbecue in summer as well as in winter time. Therefore, an extension in glass and concrete was added to the rear part of the house, almost ‘crawling’ out of the house into the garden, reorienting the life on the garden and ensuring a direct contact with it. Its 6-meter accordion window can be opened completely, blurring the boundaries between the inside and the outside. Even when it’s raining, this is a pleasant place to sit and enjoy a Gin & Tonic with an open air feeling.

Kitchen and dining area were designed in this rear part. Given the north-facing orientation of the garden, the wall-to-wall window enables a constant daylight admission into the core living areas of the house.

The extension was carried out in rough, timber shuttered concrete, true to the traditional technique. Being both striking and yet unassuming at the same time, this material creates an honest and timeless look and doesn’t withdraw the attention from the essence.

To balance the cold grey of the concrete, timber cladding was chosen to give the façade a sense of warmth. The interplay between the straightforwardness of the concrete and the warmth of the wood lends the extension a timeless character. Partly for the privacy of the owners, the timber cladding hides a window and a door giving access to the storage room, as well as a cabinet for the owner’s Tesla Wall Connector.

On top of the extension, a green roof with wildflowers was provided. On the first floor, this results in a view lending an emphasis to the (visually) extended garden.

Inside the existing house, dividing walls have been opened up to reallocate the rooms. In order to maintain the unique character of the house, original features such as marble tiles, wooden floor boards, steel profiles, old doors and cabinets have been retained or reused wherever possible.

As for the replacement of the original windows, wood was the material of preference, allowing the architect to design a unique frame profile, including a shadow gap which gives the windows a more elegant appearance.

The existing house is a robust volume made out of masonry, with small windows. The extension was carried out in rough, timber shuttered concrete, true to the traditional technique.

Also at the interior of the house this timber shuttered concrete was used for the new structural walls. Being both striking and yet unassuming at the same time, this material creates an honest and timeless look and doesn’t withdraw the attention from the essence.