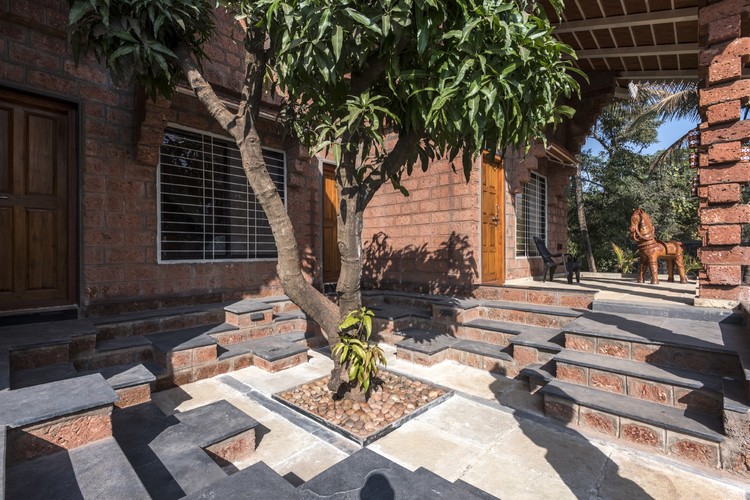 Text description provided by the architects. A project on the banks of Walki river, spreading over a land of 2.5 acres ( 10,000 sq.m.) located at village kule, tal mulshi , around 35 km on the western side of Pune city. The site was surrounded by fertile farmland with paddy fields , coconut and mango plantations. The architects had to maintain the footprint of the existing farm house built on 142sq.m. as registered in the gram Panchayat records.

The evolution of built form can be seen as the result of interaction between the user and his environment, which not only includes the natural, but also the social and the economic environments.

Client is a resident of Sadashiv Peth, Pune and inherits a typical “Peth” culture, which has houses on small plot widths, causing vertical distribution of spaces. Thus, the foremost requirement was of a multidimensional space, at one level, where the family can interact – come together, amidst nature.

With regards to the natural look and the experience that the client requested which was in consonance to the architect’s philosophy of design with nature, they decided on using the concept of Konkan architecture. The konkan house typically comprises of house made in red laterite stone, commonly known as Chira.

There was an existing mango tree adjacent to the old structure which was gifted to the client by King of Nepal . The mango tree was conceptualised as the epicenter of the house, the complete built form was planned around the tree in such a way that it became an intrinsic part of the design vocabulary.

An open space in the form of a Kund, with stepped seating was designed keeping the Mango tree at its centre. The central Kund is surrounded by habitable spaces. Living room on northern side, kitchen and dining on southern side and bed on western side separated by a passage connecting living and kitchen. The living room  is buffered on eastern and western side by large verandahs (padwi).