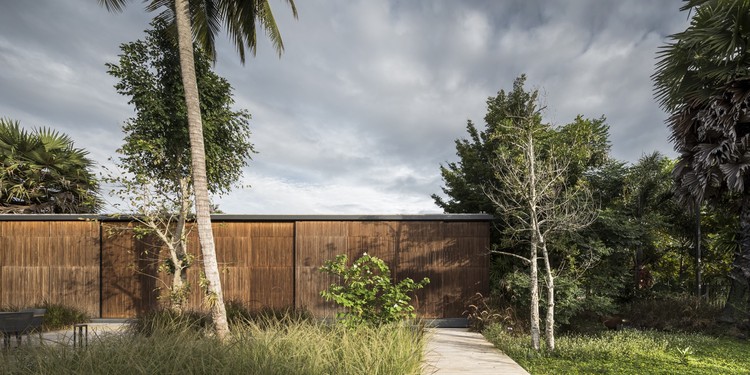 Text description provided by the architects. After living in his own aluminium manufacturing factory in a congestion of Surat Thani, the client searched for a spacious and nature-surrounded location for his vacation house. The result was the 167-meter-long and 75 meters-wide site surrounded by beautiful Palmyra palms, at the meander of the longest river in southern Thailand - Tapi River. That was the beginning of Baan Nai Bang project.

The Perception of Flat Land and the River

Due to its west-facing, flat site at the meander of the Tapi River which gives the site an expansive panoramic view of 165-meter-wide of the river, the architects enhanced the uniqueness of the surroundings as well as designed this one-storey vacation house. For master planning, the Baan Nai Bang was placed parallel to the flow of the river. While, the landscape architecture was designed to be exceedingly flat to the horizontal line. Both were meant to create an extensive sensation of the space and consistency between the river, the land and the house, as well as to bring the atmosphere of the surroundings into the house.

Moreover, the landscape architecture was designed as layering, yet based on horizontal line, to divide different areas, started from the first layer of the land to the last layer - the river. Began with the living layer, the wooden layer, the stone layer, the artificial water layer, to natural water layer - the Tapi River. These different layers were defined by particular materials and plants, no vertical boundaries like walls or fences. Similarly, the house’s plan was an open-plan, which all services were located at the back of the house, to creating spacious interior for the front of the house and to increase the connection to the river.

However, the architects concerned about the local context. Since boats were main transportation for Thai people, especially those living along the rivers, it meant people could paddle a boat along the river and looked through the borderless house. Consequently, creating privacy to the house became one of the priorities.

Instead of placing a fence at the end of the land which would block the panoramic view, the architects designed huge sliding grilled panels, made from various sizes of leftover teak, which allowed the client to slide the panels when he needs privacy. Besides, these panels could block the strong sunlight from the west to penetrate the house.