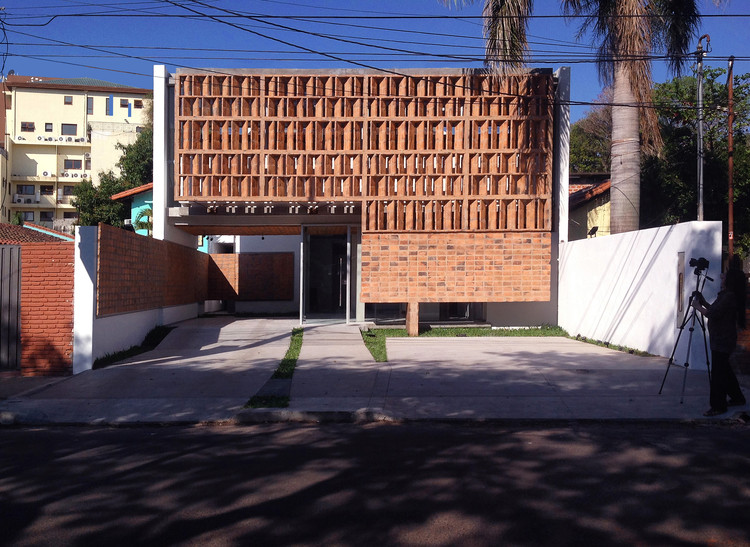 In the middle of formulation and reformulation of the contemporary city model in search of multiple resource optimization, the issue of housing production occupies a relevant chapter if we talk about energy saving, efficient mobility and reduced pollution. The space - time between these two activities is determinant, the greater the gap between housing and work, the greater the problems. From there, the idea of the urban productive unit is a solution, “I work where I live and I live where I work”; and if, in addition, existing structures for Reform and Enlargement are reused, we believe that we are collaborating with an efficient model of city, and we are facing an operation not only of recycling material, but also of an ethical order.

The project consists of the reform of an existing house into a medical clinic - house, a space that is not entirely public or entirely private, a “half-breed” space.

The clinic is articulated spatially as two bars of offices parallel to the street (one existing and the other proposed) and an interstice that contains common areas: stairs, services and patios, a withdrawal of the municipal line as a public space, which connects the street with the interior of waiting rooms and patios, unifying them in a large void at ground level.

The building proposes natural resources for energy saving: patios N/S for ventilation and natural lighting, difference in ceiling heights for cross ventilation, convection ventilation,  indirect light E/W, and a ceramic brick mesh for the west façade, the most exposed to the sun in Paraguay.

Although brick is a commonly used material for its abundance and low cost in Paraguay, recognized in its logic of supporting material, in this work we use it in the opposite direction, exploring other non-traditional modes of construction. Using the technique of prefabrication of panels armed in site, we propose skins in multiple structural conditions: hanging and detachable in ceilings; working the cut in a double skin that unifies new construction with the existing one and in a double-height mesh supported at an equilibrium point: in a mixed structural condition, traction compression and lateral buckling ... this ceramic shell is a large parasol that solves heat and excess light of the west quadrant and configures the main part of the assembly, connects the whole to the street, and is responsible for the final image.

In this fusion between public and private space, this brick epidermis functions as a configurator and identifier of the public space from the interior of the clinic to the public outdoor space. In the dialectic public space,clinic and private space, these ceramic membranes suspended horizontally and vertically construct the intestine that configures the common space: that of the meeting between the house and the clinic, the permanent inhabitant and the transitory, and connects them to the street... it is a mark, the accent of a voice that tries to extract the essence of that mixed life and offers it to the city, as an expression of a more urban life.... and more human. 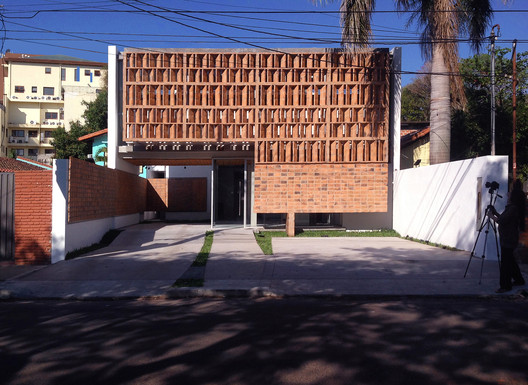