One of two islands in the Parisian Seine, the Île de la Cité is largely known to tourists as little more than the location of such popular destinations as the Notre Dame Cathedral and the Sainte Chapelle—a fate that belies the island's 2000-year history as the center of Paris. However, now there are plans underway to restore the whole island to its former importance: under Philippe Bélaval, the French Centre for National Monuments has selected Dominique Perrault Architecture to design a 25-year masterplan, titled Mission Île de la Cité, to bring back the island’s relevance as something more than a dissonant collection of tourist destinations. 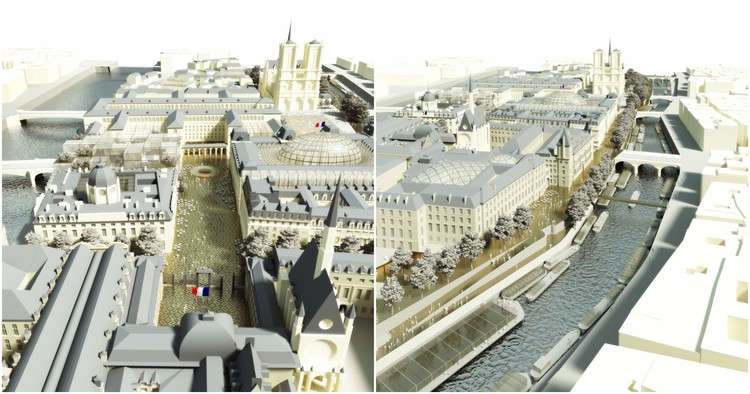 From Roman times to the 1850s, the Île de la Cité was an active and evolving residential and commercial area, with its gradual, organic urbanization fueled by river trade and militarism. But in the 19th century, when Baron Haussmann’s massive urban planning project in Paris demolished small, winding streets and built large blocks and avenues in their place, the island was not exempt from the overhaul.

Today, few of the original residential and commercial communities remain. Arteries that move tourist traffic between landmarks are overcrowded with visitors, while the rest of the island, empty and undesirable to locals, experiences lifelessness and population decline. Haussmann's inaccessible public squares sit unused and hidden by large administrative buildings, and a lack of pedestrian pathways keeps locals from ever crossing the bridge onto the Île de la Cité. The legacy of 19th-century urbanism is the main reason behind the island’s slow degeneration as a residential neighborhood, but it still holds some of its built history and sinuous alleys in a few untouched areas.

The Mission Île de la Cité comes at a time when key administrative organizations, such as the Court of Justice, police headquarters, and Hôtel-Dieu, are planning relocations away from the island, meaning large footprints will be left behind for repurposing. Dominique Perrault Architecture was selected for their experience in similar heritage and regeneration work, including such projects as the Pavilion Dufour Château at Versailles and the Pont de Sèvres Towers citylights renovation.

The final goal for 2040 is, in the words of the designers, to transform the area, "evolving the island of monuments toward an 'island monument.'" The design aims to represent the island's many layers of history, uses, and interest groups. The proposal is made up of 35 interventions of different scales and programs meant to regenerate locals’ interest in the island, reclaim and reappropriate unused square footage and public space, and honor the area's historic architecture and urbanism.

In order to draw public attention to the proposal, the plan for Mission Île de la Cité is currently on display at the Conciergerie Museum until April 17th, along with a book, app, and online virtual guide to the island and its proposed interventions. 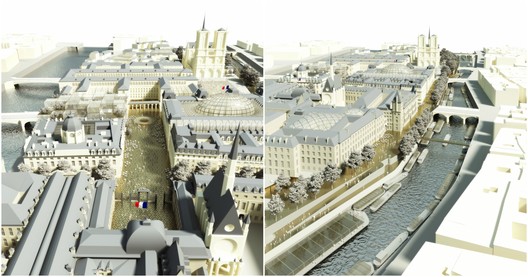