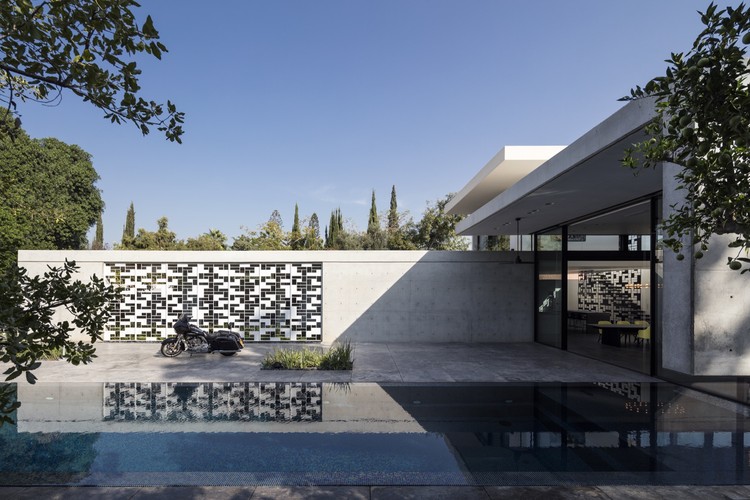 Text description provided by the architects. The house consists of two, central boxes – one, a long rectangle constructed from exposed concrete, floats above the excavated yard and a reflection pool. The other is coated in white plaster.

Both of the two, central masses are covered by a metal net, painted white. It is, if you will, a modern-day interpretation of the Middle East crises. The metal netting is constructed in a recurring, geometric pattern that allows light and air to enter the enclosed spaces as well as the interior and exterior areas that it combines.

The netting meanders across the house almost as if it were marking out a series of contours. At times, it is ethereal allowing light and air to access the spaces.  Sometimes it is closed, acting as an entrance whilst at other times it is inlaid with a system of pivoting doors that allow one of the facades to appear dynamic and ever changing.

The same geometric pattern is repeated in different the building’s interior design. For example, a metal wall that follows the floating stairs acting as a perforated balustrade.

On the building’s southern side the concrete mass is truncated by an 11 meter long, hanging wall which, through the use of complex engineering techniques and solutions, does not touch the ground. The wall seemingly floats above the reflecting pool

During the day, the metal netting allows natural light to enter the building, creating shadow pictures on the concrete surfaces. At night, the light expanding out from the house’s spaces and the garden, seeps out through the netting creating a “statue of light” on the plot. 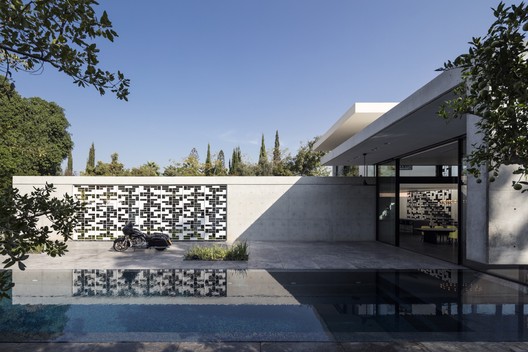