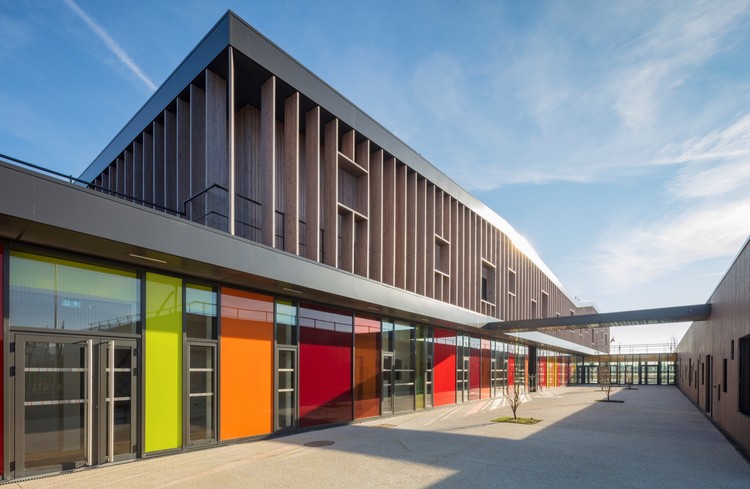 Text description provided by the architects. The early childhood school complex designed by Philippe Ameller and Jacques Dubois in the suburban town of Serris, east of Paris, does not seem to be particularly alien or extravagant: a low rise building with discreetly arched roof contours, lots of wood, pleasantly wide window surfaces and cheerful colors. But the urban context makes the new building a real UFO, as the Pierre-Perret School (named after 82-year old French living legend in humorous and humane songwriting) is located near Disneyland Paris.

Since its inauguration in 1992, the notorious amusement park has been not only a true engine of urban development on the greenfield, but also provides its peculiar aesthetic direction. The architects themselves speak of the urban setting as a "caricature of the classic Parisian architecture, known as Haussmann style", which has emerged here in recent years. In the area, a total of almost 2,000 apartments were built around the school site. Three- to four-storey lines and city vaults with classicist decor, line up along accurate streets, hardly concealing gigantic parking spaces and shopping centers in their backs.

In this artificial area, the architects challenged the local mainstream tastes with their new school.

The design follows established principles of school building. It arranges the functions meaningfully in the area and creates attractive outer spaces. The access to the building complex takes place from the south, through a generously glazed foyer. On the left is the one-storey, L-shaped tract of the nursery, framing a playground. And on the right, the two-storey, long-stretched component of the school. On the ground floor are the public functions such as the cafeteria and library. On the upper floor, the classrooms. Between the two wings of the building is a narrow pause yard, planted with a few future tall trees. Materialization and coloring reveal the architects' ambition to create a warm and inviting feeling. The facades have been generously worked with larch wood, and a lot of color is found not only outside, but also inside the house.

The project by Ameller, Dubois & Associés is so clearly conceived as a counter-program to architectural and urban themes in the Disneyland area that it can be understood as a didactic: a UFO with a mission, landed between artificial facade architecture, firmly believing in the qualities of a contemporary architectural language as the first step towards learning and creative action at an early age. Not only the color and the use of wood and glass but the building structure itself marks a discernible counterpoint to the undercooled plaster façade of the allegedly so inviting neoclassical architectural language of the surrounding area. 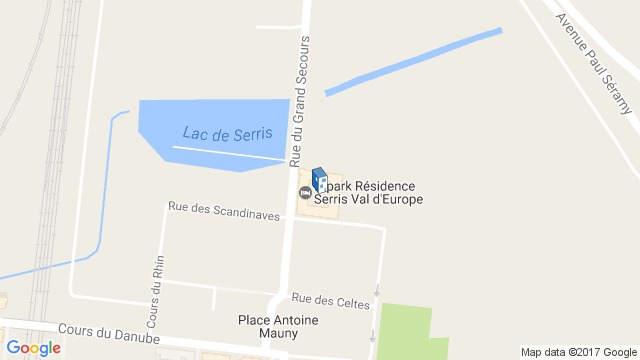 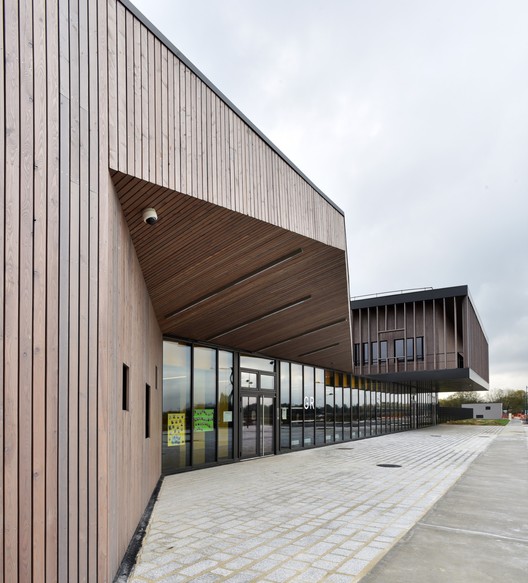