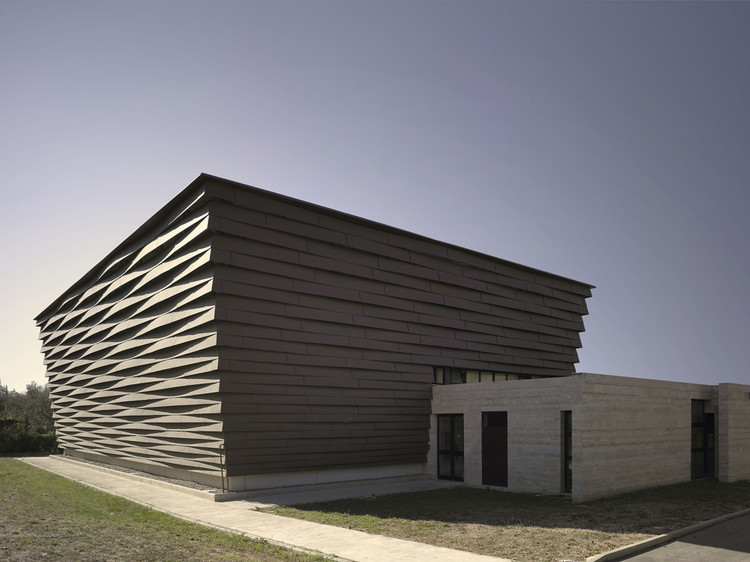 Text description provided by the architects. Each and every project realized by Leonardo da Vinci, whether a building or a model airplane, was inspired by the human body. As such, this gym on the outskirts of Sesto Fiorentino, near Florence, can be considered a tribute to Leonardo’s work and genius. The copper plates covering the exterior of the gym makes the building look like muscle fibre. Thanks to the nail-less mounting, the plates are free to move and expand in accordance with one of copper’s key characteristic.

The sheets are assembled on a reticular structure made of zinc-coated iron clad with wooden slats and their curvilinearity determines the undulation of the copper ribbons, which are mounted with simple joints, avoiding the use of nails or other fasteners and allowing them to shift according to thermal dilation. In this way, the building is a kind of organic fragment that lives with the seasons almost as if it were a natural element.

Built to serve as a gym for a pre-existing town school, La Fonte is an independent building and can also be accessed by private users. The space is organized in two simple orthogonal volumes, designed to be inexpensively prefabricated. The main structure is made of prestressed concrete and is similar to the industrial hangars one find in the Sesto Fiorentino area. The smaller volume, clad with travertine is where changing rooms and utility rooms are located, whereas the bigger volume is used for sports.

The geometry is once again rather simple: both sections are rectangular in plan, with a corridor joining them and giving access to the various rooms. The simple geometry of the interior contrasts with the variety and complexity of materials used in the exterior, which determines the importance and value of the project, small though it is.

The choice of copper for the exterior is striking; the metal’s flexibility to form and structure makes the building look like a giant lung, able to breathe and make the surrounding area breathe. The breathing metaphor thus draws a parallel with the very purpose of the building: the practice of sports. 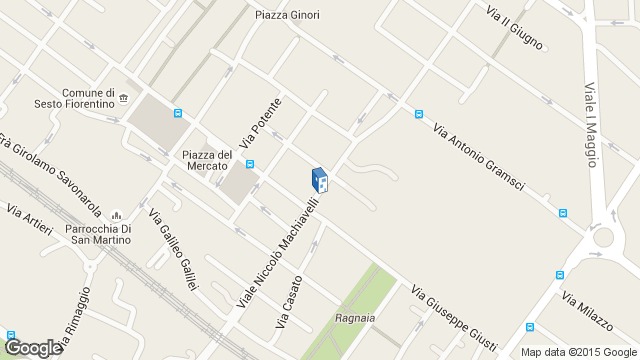 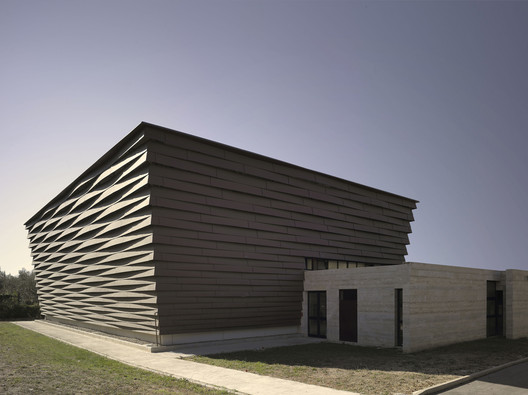