The Parklands, South Bank, Brisbane, Australia, has played host to Lightwave, a sensory light installation at the Unlimited festival. At 10m x 16m x 5.5m, Lightwave is not just a sculpture or an art piece, but an object that can be interacted with, like a large animated toy or hybrid living creature—glowing and pulsing by the river. The design by AnL Studio was intended to provoke conversations about using contemporary parks as a performative public space. By offering a new and unexpected experience between people and the object (displayed art), or between nature and the (artificial) object, Lightwave responds in a purposefully dynamic and playful way, engaging and inviting public participation. The object is responsive to the new environment, therefore generating a new pattern into the place and time. More explanation and photographs of Lightwave following the break. 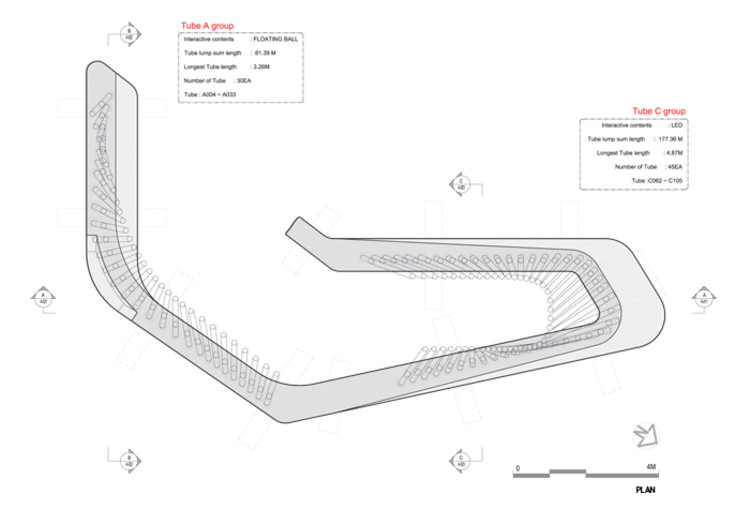 Facilitated and presented by South Bank Corporation, Arts Queensland and Unlimited: Designing for the Asia Pacific.

Through this experience with Lightwave, the designers wanted to ask the audience to think about the following questions: What surrounds you? What do those surroundings mean to you? Not only does the interactive content consciously provide the chance (or occasion) to express the bystander’s behavior, but it provides this experience through undulated formation by way of the invisible network vertically/horizontally/perceptively, in order to absorb the physical boundary (situation) and maneuver the public to explore the diversity of Lightwave with their performance.

The fluid configuration is intended to animate the trajectories of the undulation/fluctuation so as to unite the top and bottom, the beginning and end. It ultimately invents an infinite loop as well as varied visual effects from many view points.

The project consists of two clusters, associated with architectural elements including a seating area, dictated pass-way, and reflected objects (layering tube), which is designed to create a continuous network. Each cluster is composed of a group of polycarbonate clear tubes and embedded LED lamps and lighting balls, arranged into an undulating surface with different densities/angles, sitting on top of architectural element, so as to create an encompassed space. Over the interactive contents, the density/angle will trigger the viewers’ activity with different and unique reflection, and create patterns through the tube/cluster.

Each unit of the transparent tube contains electronic module devices including infrared sensors and Micro-controlled circuits capable of recognizing the proximity of visitors. When triggered by the sensor, each electronic device delivers diverse kinetic lighting effects expressing a feeling of expanding, breathing, blinking, floating and shrinking by the different sequence of participant’s behavior in front of the installation units.