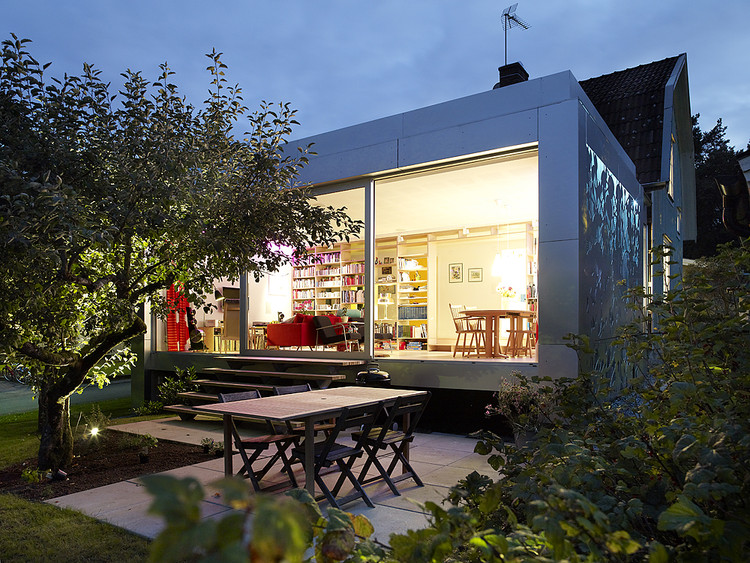 Text description provided by the architects. Around the lake Gärdsken, in the southern parts of Alingsås, a residential area with villas mainly from the 20th century is situated. Originally, these were small wooden two storey houses with a basement in stone and vernacular detailing. Nowadays however, almost every single house is rebuilt and enlarged beyond recognition. The owners of one of the few houses left intact wanted more space as well as renovating the existing house. The first sketches were made in 2005 although the construction did not start until late in 2008 because of the overheated construction market.

There is a well-developed grammar in Swedish building culture on how to extend a house with a traditional gable roof; usually a ridge is established at right angles to the existing one. To be successful this requires that the extension is subordinate in size. The possibility to build in a completely traditional style was tested in a sketch, but was found too obtrusive because of the size. The new wing “devoured” the old house. Thus we chose instead to aim for maximum contrast in expression.

On the eastern part of the plot is a beautiful old stand of trees. The proposed movement in this project follows the principle often used in Japanese garden art; first you spot the main vista (the orchard), then it disappears out of view - but is not forgotten. In the third step of the sequence the viewer stands before the garden again. A large custom made shelf is the element that obscures the garden in the second step and forms a filter between the hallway and the living room with its view of the garden.

A new corridor and entrance is introduced between the new building and the existing house. From this corridor almost all the rooms of the house can be reached and it can also provide a more representative entrance to the living room when necessary. The new living room has a maximum of openness towards the garden, but is closed to the street to ensure privacy. At the same time, the city planning office required window openings in this facade to lighten up the impression from the street. The solution was to shape the aluminium sheets of the facade as a trellis for growing vines. It always takes time for the vines to establish, therefore we have designed a pattern that brings a lifelike quality to the facade in the absence of greenery. The laser cut pattern is inspired by vines and forms a favorable shape for the tendrils to climb on.

The house is founded on masonry walls. The bottom floor is constructed of 220mm beams while the roof is supported by glulam beams. As the facade material was chosen 3 mm anodized aluminium plates applied with stainless recessed screws on an adjustable framework of galvanized steel profiles. All sheets are prefabricated at the workshop. The extension is heated with floor heating.

In Sweden there is a long tradition of working with steel sheeting (about 0.6 mm thick), connecting the different sheets with folds to achieve an impervious surface. This technique is mainly used on horizontal surfaces; when applied to facades the steel (about 1.0 mm thick) is often folded into cartridges to achieve stiffness. Both of these applications will result in a buckled and dented surface because of temperature movements combined with the fragility of the thin plate. Japan with the architect Fumihiko Maki as chief advocate has a highly evolved tradition of using thicker sheet metal in facades. These give an entirely different precision and a smooth impression and require new detailing as they can not be shaped on-site by sheet-metal workers. Since we wanted a contrast between the existing and new house, we chose 3mm thick aluminium plates to achieve a high precision.

Aluminium can be utilized with a raw or anodized surface. Eventually raw aluminium forms an oxide layer, but it’s just one-hundredth as thick as is achieved in anodizing. It also makes a more organic impression with streaks from running water and a living surface. An advantage is however the ability to bend the raw aluminum on the construction site.

Since we were seeking a precise expression we chose anodized plate. The plates were first processed mechanically and subsequently sent to a finishing company that through an electrolytic process created an oxide layer on the plates to a selected thickness (25 micrometres in this case). This provides a 100-year durability which meets the clients request for minimal maintenance. This oxide is as hard and brittle as the glaze on china in terms of hardness rendering it impossible to perform any kind of processing to the anodized plates without cracking this layer.

We chose to work with subcontractors to the automotive industry for the production of the plates. If one dares to say that the Swedish construction companies often work with a dubious precision, the Saab and Volvo subcontractors excel at a high level. They work with digital fabrication and industry tolerances +/- 0.1mm compared with the permitted construction tolerance of +/- 10mm. Riboverken in Gothenburg, laser cut all of the plates with CNC (Computer Numerical Control) according to our drawings. In this process, it is no more costly to cut a curved line than a straight. With prefabricated plates, you get a clash between two different sets of tolerances; the exact surface and the imprecision of the studded frame. This is addressed by an adjustable framework for the facade plates.

The eye-catching pattern on the gables is a plant motif that are developed by us and translated into digital manufacturing drawings; also laser cut at Riboverken. Laser cutting can be done to a certain thickness. For thicker plates you have to switch to water-jet cutting. Aluminium is available in a variety of alloys and because we wanted a small bending radius and a anodizing we chose alloy 5005.