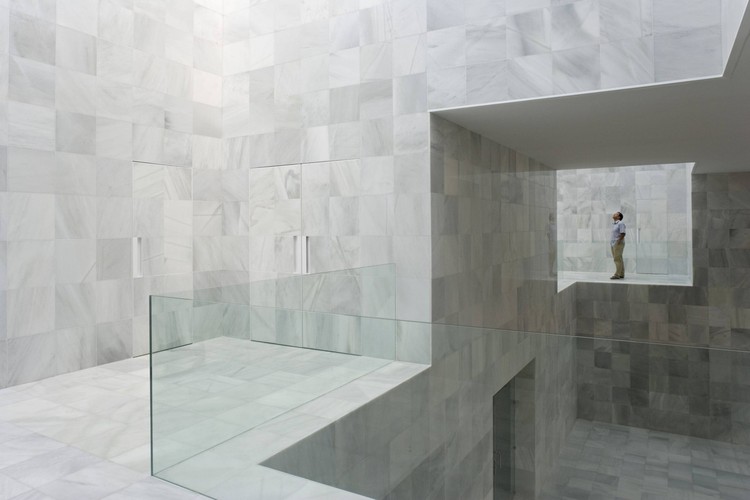 The unique architecture of the building, which houses the specific programme of uses for the Granada Business Confederation, lies in its functionality, in making the most of the spaces and the light, since the cubes that compose it are oriented so as to capture sunlight at different times of the day. There are two central elements in this construction: the first of them is a central hub with a square floor plan that operates as an interior distributor of the building´s three levels, plus two north-south/east-west diagonals on which rests the final layout of each and every one of the interior pieces of the building. The building is distributed over three storeys in the following fashion: it is accessed from the courtyard, with a reception and distribution space in the manner of an atrium on a double height, lit up via its corners, ground floor with the more generic uses such as classrooms and assembly hall, first floor dedicated fundamentally to administration and a second floor housing the offices of the chairman, secretary and boardroom. The top floor is recessed to make it possible to protect the light in the corners. Particularly outstanding, therefore, is the way it makes the most of the spaces and the light.

Justification of the proposed urban insertion

The building for the new headquarters of Granada Business Confederation is approached as making the most of the considerable level of foundations caused by the major excavations of the natural terrain, just over 2,50 metres in depth, that exists on the plot in order to situate at this level the access storey and the surface-level car park of the building, and to place the building in the back part of the plot, that is, according to the alignment with Maestro Montero Street and Maria Zayas Street. In this way tow heights are obtained above the level of the street in order for the new building to meet the maximum height determined in the current byelaws, plus the three heights inside the plot in the north-west elevation of the building and the car park. As a consequence of this approach, the access floor is considered as a semi-basement storey with regard to the access floor in its alignment with external streets, and as a ground floor with regard to the interior level of the plot, to access the building via a semi-basement courtyard from the street outside.

This situation of the building on the site coincides with the north-south orientation in its diagonal, a crucial parameter for the general layout of the project´s interior spaces.

The geometry of the floor plan follows a very clear-cut layout plan organised around a square occupying the north-eastern end of the plot´s trapeze-shaped plan, in the centre of which is a square that operates as a basic organiser of the interior space. This square and three of its secondary diagonals operate as layout mechanisms that complete the organisation of each and every one of the interior spaces.

The main entrance to the building is situated in Maestro Montero Street because this is the one with the greatest dimension and importance. A common entrance for vehicles and pedestrians has been established via a gentle eight percent ramp that leads to an open courtyard at the level of the access floor, the semi-basement floor in the front alignment and the ground floor in the interior level of the plot. A secondary vehicle and pedestrian exit has also been built in the car park and in the façade corresponding to Maria Zayas Street, to allow it to also be used as a second exit in case of emergency.

Once the semi-buried courtyard of the building has been accessed from Maestro Montero Street, a reception vestibule welcomes the staff. Behind this control is the main space that organises the project, an atrium clad in white marble over a double height in which three of its corners are perforated at first-floor level to allow the morning, midday and evening light into this space, as the diagonal of the building is oriented in the north-south direction. These corners perforated in the diagonal of the central space also feature a double height, with each one covered by as a many skylights and with glass closing off the corners of the second floor from the outside. This main atrium, situated at the level of the access floor, can be used as a reception and distribution space for the zone of the training classrooms, the assembly hall and the hub of vertical communications, facilities and lavatories that form a unit in the vertical of all the storeys. The ground floor, after exiting the vertical communications hub and lavatories, gives way to the corners of the principal atrium, also on a double height, that provides access to the offices as well as operating as distributors open to the central space of the building. The second floor is dedicated entirely to chairmanship spaces so that behind the vestibule of the vertical communications hub the secretary´s zone is accessed from which, in turn, it is possible to access the excutive committee room and the offices of the chairman, vice-chairman and general secretary. On this floor the corners are recessed to allow natural light into the vertical enclosure of the skylights in the main atrium, to finally become terraces at the level of chairman´s floor.

The external image of the building is composed of an enclosure lined in Sierra Elvira marble and frames in anodised aluminium. The break-up of this cladding is executed in pieces measuring 20x60 and 40x60 centimetres. The internal atrium has been lined in white Macael marble, as has the floor, in pieces 40x40 centimetres.

The abstract nature of the cladding of the internal and external walls of the façades of the building derives to a large extent from this same condition of the cladding, so that is the consequence of the absolute sharpness in the perception of its volumetry. 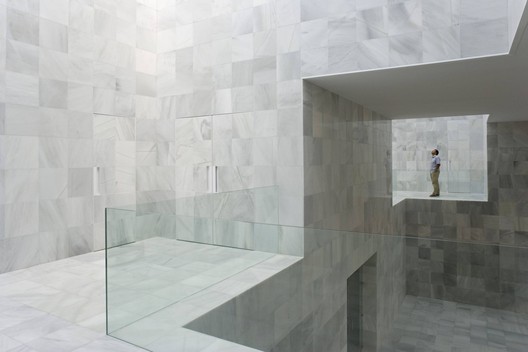