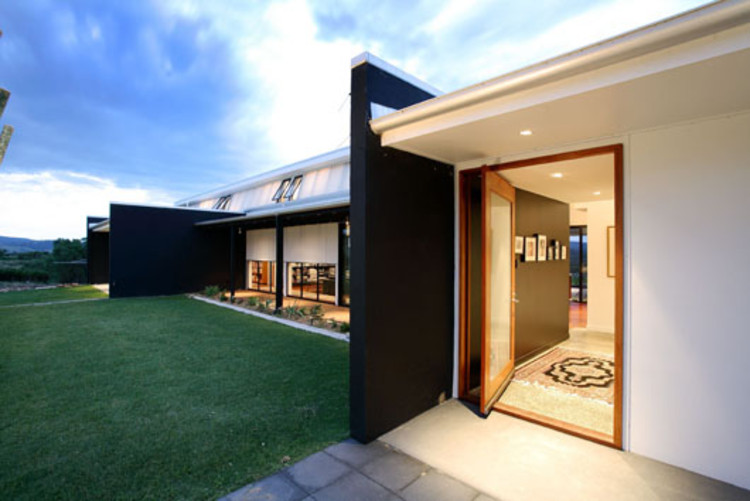 Text description provided by the architects. The Tobin Winery is located on a North facing gently sloping site on a vineyard in the heart of the Granite Belt. The vineyard merges with remnant scrub that borders a creek while occasional protrusions of the local granite punctuate the landscape. With Sundance Road dissecting the site, the house is located at the top of the site, looking down over the vines, road, and creek to the distant hills.

The form of the house was driven by respecting the aspect, framing the view, and the making of place by casting a strong shadow under the continuous overhang. By folding the roof down at both ends the ‘shed’ is referenced and the notion of shelter is celebrated. The strength and solidity of the helmet roof is a response to the harshness of the climate and toughness of the landscape. As opposed to touching the earth lightly, the solid form grounds itself and creates a sense of stability and resilience. Services are relegated to the lower black boxes, with the living/sleeping spaces enjoying the soft southern light through the roof skylight that manifests as a lantern and entry marker at night.

The poles, water tanks, awnings and pool employ the ‘homestead’ strategy to define the external rooms. In time, the landscape will grow and ancillary structures will evolve to breathe life into the interstitial spaces.

Organisation of spaces inside and out

The organisation of the house is divided into the private residence and the Bed and Breakfast. It was always the intention that guests could be accommodated separately or that the house could be opened up to house the extended family at Christmas and gatherings.

The linear organisation allowed this to happen whilst permitting both users to enjoy the view and aspect.

The ancillary elements including the water tanks and poles were positioned to define external spaces and structure the landscaping.

The final site location was primarily informed by the aspect and then tuned to address the view. The overhang was calculated to protect the glazing from the summer sun and admit some direct light in winter.

Flow-through ventilation was encouraged by the awning windows in the clearstory. To counter the heat load on the clearstory and to counter heat loss in winter, a twin wall system was employed.

The angled poles were intended as a framework for a vine that would also serve to protect from the afternoon sun.

All roof water is collected in both the above ground SS tanks and larger underground tanks further down the hill. The slab adds thermal mass and the cellar is dug into the local stone to stabilise its temperature range.

Architectural expression of the concept

The concept for the overall form originated as a response to the landscape, primarily the linearity of the vines and the layered nature of the topography.

From the beginning we didn’t want to create a light, feathered, timber and tin structure. Instead, we wanted a solid form that grounded itself and offered protection from the often harsh weather. At the same time we wanted to frame the view and capture the vineyard.

The ‘Helmet’ roof was created by firstly wrapping the ends and then pulling it together by the continuous fascia hiding the gutter. The 1.2m overhang articulated the shape and informed the end elevations.

All living spaces were located under the Helmet, with service and ancillary spaces relegated to the rear black blocks. The blocks anchor the form and contrast with the landscape.

The location was a cost factor along with the need to secure a lump sum contract. The contract was negotiated with a local builder and the scope of work was cut back to meet an acceptable figure. Originally another structure was planned which was in line with the poles. This was a garage for equipment and storage. The garage along with the pool and landscaping were removed from the contract.

The pool was a separate contract managed by the client.

The original budget of $450,000 was unachievable as the scope grew. The costs were managed directly by the client in affordable parcels that maintained the quality the client desired.

The construction was kept as standard as possible to facilitate a good price and to secure a local builder. Slab on ground with a timber frame and colorbond roof.

The front verandah structure was developed to support the roof off the rafters. To permit this, PFC’s were added to the rafters in this area for stiffening.

Relationship of the project to its site and context

The location of the house was driven by the desire to have a sense of arrival up from Sundance Road through the vines, the drystone wall and gate being the start of the road. The view to the North was capitalised on with the aspect being appropriately responded to.

The house is hopefully strong enough in the landscape to become a marker/icon for the vineyard.