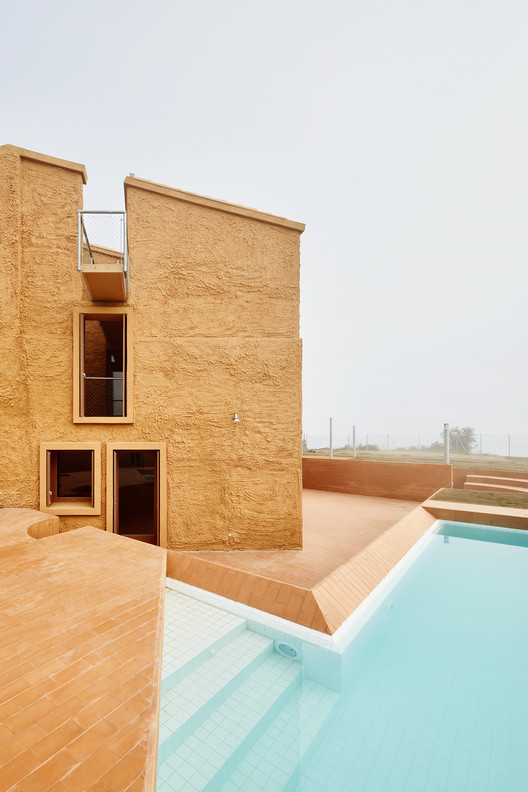 Text description provided by the architects. The land where we intervene is a flat and elongated plot of 7.000m2 in the outskirts of Santa Margarida de Montbui. The plot initially had a building for agricultural use in a state of ruin that we were asked to transform into a single-family housing. The building regulations, according to which the pre-existing construction was considered as a farmhouse despite of being just a hut with fibrocement rooftop, didn´t allow any modification in terms of volumetrics and façade openings.

The volume had a direct relationship with the environment, without preamble in the transition from the field to the interior. The change of the functional program required to define the immediate environment of the house as a more limited and protected area in relation to the totally open plain. This is the reason why it was excavated 1m until reaching the height of the terrace which gives the main access to the house and facilitates the communication with the rest of the urbanization . In this way, the proposal defines a new artificial landscape, that is conceived as the main platform of interaction between the exterior and the interior.

The functional program is developed by staggered platforms that are arranged around a central load-bearing core. This core, which performs as a large pillar, contains all kind of facilities and staircases, and interconnects the living spaces. The centrality of this pillar allows that the steel slabs overcome smaller spans and therefore they could have a smaller thickness, emphasizing the contrast between the massiveness of what supports and the lightness of what is supported.

The materiality of the house enhances this idea about contrasts and contrapostions, so that the main load-bearing elements are rough, heavy and coarse, while the secondary elements and the interior partitions have smoother and lighter finishings and are built with light structure techniques. The intervention has a chromatic palette of earthy tones that tends to relate to the environment.

The house is developed in its height as a succession of mezzanines of varying height that rises up from the common areas to the bedrooms and concludes on a balcony that strikes out to the cereal fields.