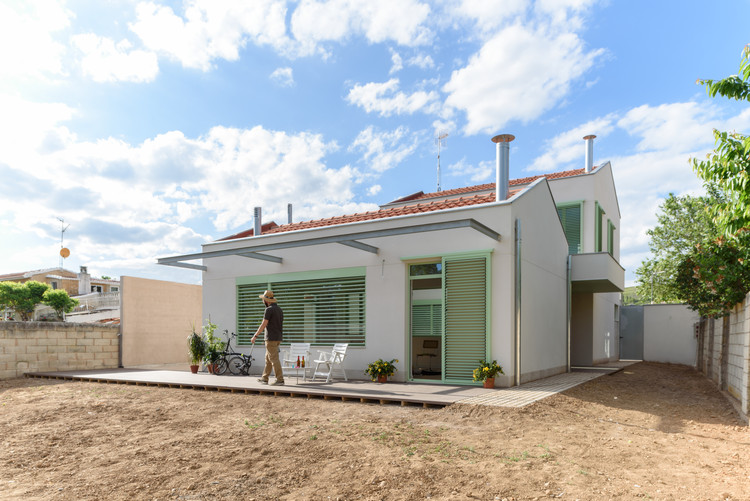 Text description provided by the architects. P and I are our clients, who owned a house with a piece of land at this district promoted by Obra Sindical del Hogar (OSH), inaugurated in 1946 and located in the southwest of the city of Burgos.

The original houses are very interesting: modest, rational, with a simple construction and based on what could be considered as a vernacular or popular architecture. Unfortunately, nowadays the district is very deteriorated, given that some new houses have been built without any link nor sensitivity to the pre-existence. So, sometimes, the district is unrecognizable.

Beyond giving a specific answer to a particular problem, the project proposes a posible solution for future interventions at this district, trying to coordinate new construction with respect for original architecture and urbanism. The project assumes some principles from traditional architecture to adapt them to the present. This way, the old and the new establish a dialogue based on logic, naturalness and tolerance.

Given than P and I’s old house was almost in ruins, together with its small dimensions (50m 2 in one floor), it was necessary to build a new house according to their needs. One of the most singular needs was the presence of 2 studios, one for print with a press and the other for carpentry.

Like the old house, which consisted of 2 pieces with an open space between them, the new house is based on a central patio which links the different spaces around it. Trying to take advantage of the strict urban regulations, which demanded that the new house should be attached to its neighbour, this connection is made by the garaje, allowing to free the main volumen, with 2 floors, and open windows in every façade.

The main volumen, to the northern street, contains the print studio and the night area, while the secondary volumen, to the southern garden, brings the day areas together in an only space. Both volumens are related spatially and visually through the patio, that welcomes people in the pedestrian access and works as a filter between the garden and the print studio, always through the living room. From the main volume’s second floor, and over the secondary volume’s roof, it is possible to enjoy Arlanzón’s wooded riverbank, which flows in the south of the site.

Environmental principles are very important in this project, thanks to its high insulation (15-20cm), adjustable solar protection to the south (blinds, sunshades, grape leaves), natural air circulation or biomass and firewood heating.

The metal structure can be seen in the main spaces thanks to profiled steel deckings, painted white. At the same time, there is a lower ceiling at the level of the doors and the windows, linked to storage (wardrobes and shelves), systems and circulations.

Remembering the original ones, the new house has whitewashed façades, Campaspero limestone wainscots and reddish tile roofs. Inside the house, spaces with water are covered by traditional green tiles.  Above all, we have tried that P and I identify with their house, and that with the use and the passing of time they turn it into their home. 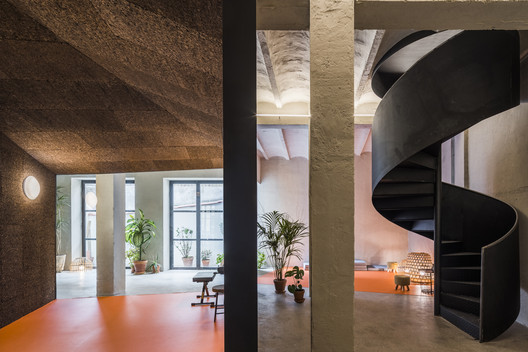