Asked for his occupation in a court of law, Frank Lloyd Wright (1867–1959) replied ‘The world’s greatest architect’. His wife remonstrated with him. ‘I had no choice, Olgivanna’, he told her, ‘I was under oath.’

The cocksure Wright was a master of the one-line quip. He told a client who phoned to complain of rain leaking from the roof of her new house onto the dining table where she was sitting to ‘move the chair’. Thinking of Mies, he said, ‘Less is only more where more is no good’. On seeing his tall assistant, William Wesley Peters, inside one of his latest and rather low-ceilinged houses, he barked, ‘Sit down, Wes, you’re ruining the scale of my architecture’. Of himself, this very original American architect bragged, ‘Early in life I had to choose between honest arrogance and hypocritical humility. I chose the former and have seen no reason to change.’ 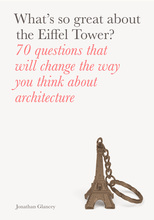 What's So Great About the Eiffel Tower? 70 Questions That Will Change the Way You Think about Architecture
Buy now
Buy from
amazon.com

Wright lived a roller-coaster life. He abandoned his first wife, Kitty, and five children and fled to Europe with his mistress and client, Mamah Cheney. On their return to the US, Mamah and her children were murdered at his home, Taliesin, which burned down (and Wright rebuilt) twice. His autobiography, a best seller, was the inspiration for Ayn Rand’s novel The Fountainhead, made into a dramatic film with Gary Cooper in the lead role.

Wright’s architecture could be something of a fairground ride, too. When questioned over the heights of the galleries in his sensational Solomon R. Guggenheim Museum on Fifth Avenue, he said, ‘Cut the paintings in half ’. ‘A doctor’, he joked, more than half-seriously, ‘can bury his mistakes, but an architect can only advise his clients to plant vines.’

Designed as a weekend retreat for the wealthy Pittsburgh store-owners Edgar and Liliane Kaufmann, Fallingwater (1939) was built on an outcrop of rock over a waterfall at Bear Run, Pennsylvania. Its three floors took the form of ambitious 19-metre (62-foot) concrete cantilevers, thrust 5 metres (16 1⁄2 feet) over the fast-falling water from a rock where the Kaufmanns had long enjoyed picnics. This was a dramatic and costly move, yet Fallingwater was a truly beautiful design and the Kaufmanns could well afford the $155,000—a huge sum at the time; the budget had been $30,000—they paid for the house of their dreams.

In 1997, scaffolding was put in place to stop Fallingwater falling down. Four years later, a repair programme was announced. It would cost $11.5 million to right the wrongs of those daring cantilevers. Robert Silman, a structural engineer from New York who had already worked on seven Wright houses, planned the work. ‘This doesn’t diminish the architectural brilliance of his buildings’, he said. ‘One after the other, they are absolutely breathtaking.’ And this is why, Fallingwater – expensive to build and maintain – will never be short of funds. Wright’s architecture could indeed be a liability, yet those who choose to live in Wright homes love them, and, as experience tells us, the price of true love can be very costly indeed. 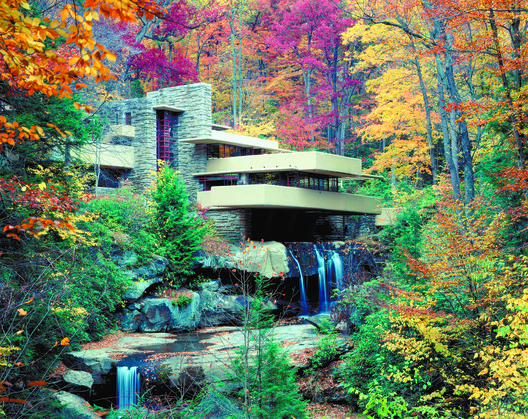