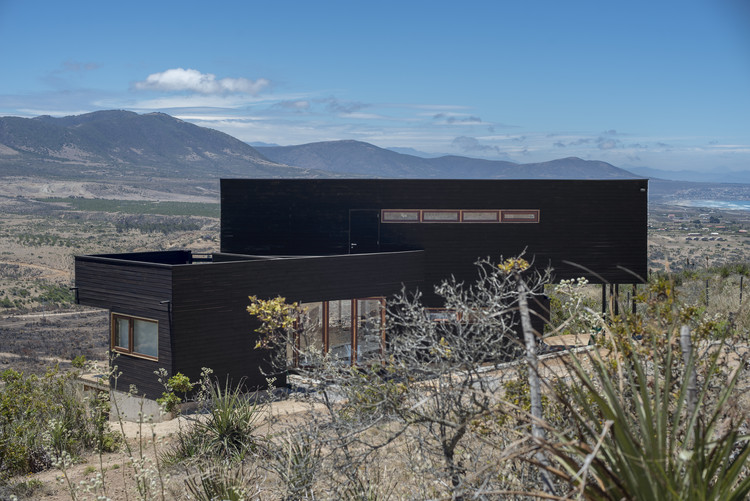 Text description provided by the architects. The house is located near Los Molles beach town, in the fifth region of Chile, in a half acre field in a pronounced slope from where you have a main domain of the mountain range view, while the sea appears distant and tangent.

The flattest area of ​​the land was chosen to locate the house. An anterior border was defined against the ground, which delimits an outer space and gives thickness to the access area; and a posterior limit, encounters the perimeter of the house and the steep slope.

The Project arises from the combination between levels and sights, which on the one hand, proposes relations of spacial interior continuity and on the other, it relates this interior with the horizons.

In the first floor, the main topographic levels were redefined as well as the natural paths that existed in the natural terrain to preserve the sensation of moving in the slope. This condition in addition with the size and orientation of the spans constantly frame new horizons of the beach and valley.

Two main volumes, of 1 and 2 floors respectively, were defined. The lower one, which does not interfere the view of the mountain when descending to the house, corresponds in the first level to the guest’s area and in the second, to a panoramic terrace where the hot tub is located.

The volume of two floors, indoor and outdoor common spaces on the first floor, and bedrooms in the second, is rotated in relation to the volume of one floor, directing its views towards the bay of Los Molles and the perpendicular view to the sea from the master bedroom.

The west side, which faces the slope, appears as a continuous and closed surface, which allows only the necessary spans to illuminate the hallway spaces, distancing itself on the first floor from the living and dining room, and on the second floor, the bedrooms, from direct solar radiation.

The south-eastern side, which has a sinuous perimeter, accommodates the intermediate spaces and larger spans that collect the main views.

The Project material is mainly wood, both structure and cladding. The black color and the measured and dim lighting, work together to dissolve the volume at dusk and thus get lost in the landscape.