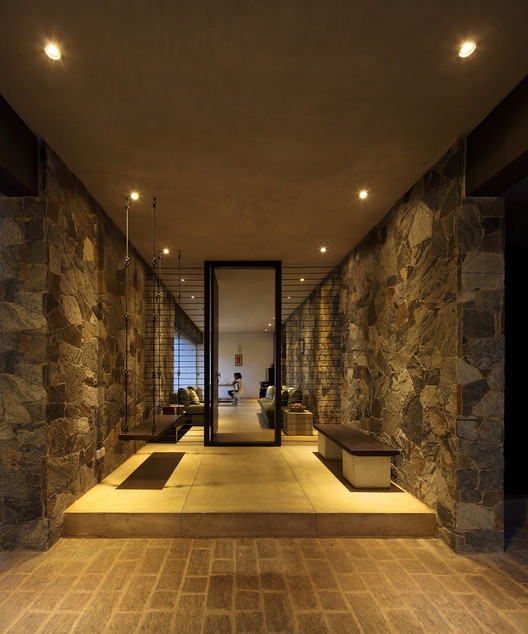 Text description provided by the architects. Sited in the vibrant city of Colombo is the ‘Urban Envelope’, the dwelling house of a metropolitan architect. With its univocal façade seamlessly weaving itself into the tight residential fabric of the city, the abode has been named for its distinct concealment from the dusty and noisy urban street life of Sri Lanka’s commercial capital.

The pure white walls of this confine blends with the light and cloudy tropical sky, its towering mass a nod towards the upcoming skyline of an expanding Colombo. Only a row of creepers along the driveway, and a single tree with moderate foliage invites visitors inside. An antique door hidden off the side opens the ‘Urban Envelope’, revealing the surprising urban oasis amidst the barren concrete jungle of the city.

The voluminous forecourt is bordered by signature rubble walls that lend a rustic solidness to the house. The apparent hardness of the structure is softened by tropical greenery that together with an unrefined steel swing gestures visitors onwards towards the large void of the main door. The living and dining space between two solid rubble walls gives a lasting first impression to the interior.

The play of rubble and white plastered walls to create spaces between materially defined parallel lines sets the design language of this metropolitan dwelling. The overwhelming dimension of the backyard lawn animates the living space, climaxing the urban oasis. The forceful vista with its vastness in comparison to the tube like confinement of the indoors impacts a relaxing awe within the visitor. This play of volumes guides the design throughout the progression of its spaces.

The staircase is wedged between two parallel rubble walls, further enhancing the design language. The tight volume opens to the sky from one side, and connecting to the open spaces throughout the house acts as an effective wind tunnel. This is supported by its orientation towards the wind direction.

Unrefined timber and steel fenestration and furniture add zing to the otherwise modest design in a pleasing contrast. The quiet retrieval of daylight makes way for man-made lighting, animating the design in warm white floods in soft glows against the dark of the night. The tranquil solitude affected by this subtle play of contrasts; solid and void, light and dark, roomy and narrow, parallel and lateral… creates a refreshing and relaxing habitat.

The orchard by the garden side brings the metaphorical oasis to literal meaning. This little corner in the wide expanse of urban Colombo with its edible vegetation signifies a greener prospect for the emerging metropolis. In symbiotic coexistence with nature, the urban sanctuary is enlivened by the twitter of birds and the skipping of squirrels, which brings the design to blissful contentment.