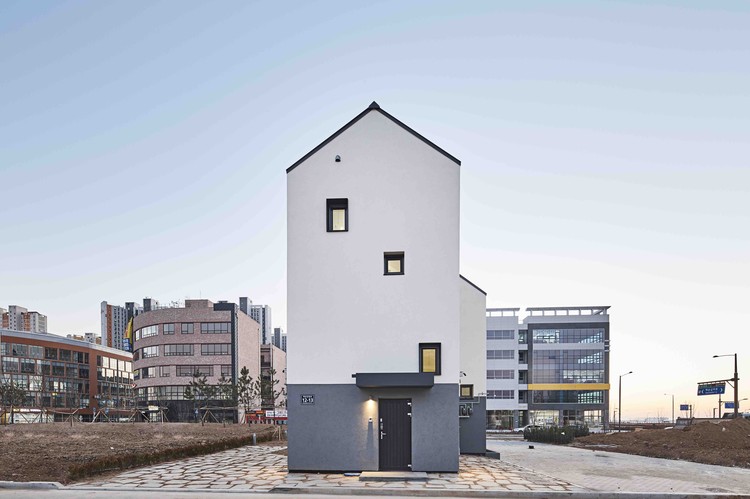 A young landowner, who has lived in an apartment for about 10 years, has been given a detached housing area within a housing site development district. This young couple with a 7-year-old child visited our office with an intention of having a single-family home where the child could enjoy more playful interaction with its surroundings. This 248 m2 land is a class II exclusive residential area with a 30% building coverage ratio and an 80% floor area ratio. It is a district unit planning area with slightly smaller building coverage ratio and floor area ratio than other class II exclusive residential areas. We started working on constructing two homes with 72 m2 of building area here.

Requirements from the owner

1. House for two families: They wanted two homes for easier accommodation into a relatively new neighborhood since the house will be second of its kind in a new housing site development district with a few neighbors. Also taken into consideration was that this will be the first time for the families living in an independent house.
2. They hoped that potential leasing would cover the initial construction costs and would also generate rental income in the long run.
3. They wanted two separate main entrances for privacy.
4. They wanted living room and the kitchen separated so that the sights and sounds would not interfere with those from the living room.

A. 1+1=1 (Two gardens like one yard)
Yards were placed so that the front yard would be seen as wider and deeper with connection to the buffer lot adjacent to the field.

B. Long house, Long wall
We built a long house that conforms to the shape of the earth, so that the house itself can become a natural wall and border. The plan was arranged to ensure privacy. (We could not create a separate wall from the district unit plan; only a 80cm-high hedge was allowed.)

A. 1+1=1 (Two homes in one house)
We set the mass by crossing the houses for two and to build a completed form in one house. The courtyard and the front yard, naturally defined as a result of crossing the mass, will each become the yard for the owner and the renter respectively.

The owner's house has two floors and the attic; the rental house has three floors. On the second floor, people would feel a sense of space offered by the attic, and even though the gable shape of the roof is in its natural, simple form, the interior would present various sense of space. From the third floor of the rental unit, we designed so that residents can feel the gable shape with secured high ceilings, which presents a sense of rich space despite the small size.

C. Bordered/Borderless
All doors to the rooms are planned as sliding doors, so that when the doors open and close, they also open and close the associated spaces, therefore recognized as one space.

The biggest problem was the construction of two separate houses facing the ground on a small land. When the excavation was proceeded and foundations were laid, we were reminded of the worrying words of the owner. "Is it a one-room house?" We thought that it is not yet ready to understand the single house which has the same area but looks smaller than the apartment, to organize the way of life that has lived and to adapt to the new life environment. The insulation performance, heat recovery ventilation system, and triple glazing window system, which were standardized by the district unit plan, became the prestige of raising the building cost based on the passive house standard. We had to make the owner understand why the building cost was different from what they know from a lot of media and blogs were covering.

The house, which was built in August 2016, was completed in December 2016 and became a new home for the owner. I hope to give them a new life, and to be a ‘Jeongwang-dong Du Jib’ (Two Home in Jeongwang-dong) for them to gather together warm happiness.