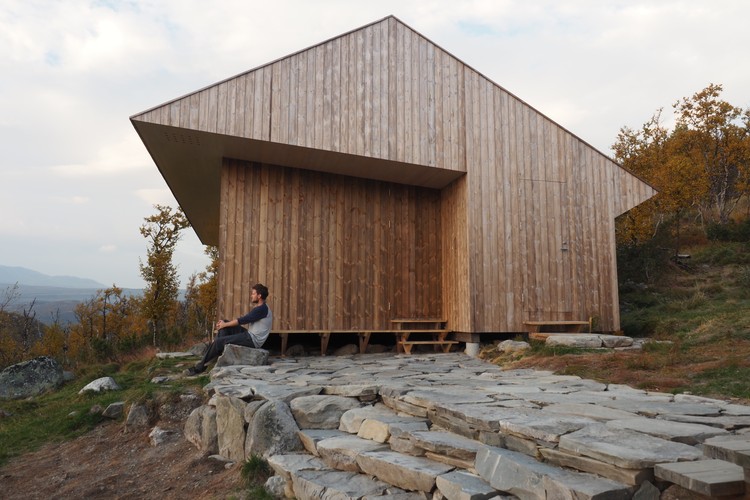 Text description provided by the architects. A cabin for use all year. Situated 1066 meters(3,500 feet) above sea level, mid-way between Oslo and Bergen, at the foot of the mighty Hardangervidda – one of the greatest mountain plateaus in Europe. With no road connection, materials for the build was flown in with helicopter. The groundworks were done manually to preserve the slow-growing vegetation one finds at such altitudes in Norway. The foundation consists of pillars standing on the bedrock. The outside of the building had to be finished during the short summer months. The rest was completed mid-winter, when materials for the interior could be transported in with snow scooter. The cabin is clad in pine, inside and out. 3-layer, insulating and solar protected glass panels take in the view of the Ustevann(lake), Hallingskarvet(mountain formation) and Hardangerjøkulen(glacier), all in the same panorama.

With this view in mind; the idea for the main room was to create the experience of being outside – exposed to the shifting scenery. To achieve this, the entire view-facing wall is made of glass. The ceiling is tilted, attempting to "explode" the room even more. The tilted ceiling, in combination with the “open” wall, alludes to the gapahuk, a Norwegian ur-type of improvised shelter used when hiking: two posts with a horizontal log on top, and a layer of branches leaning on it, making a makeshift roof and leaving one side of the structure open.

Above the ceiling mentioned is an attic for storage. The cabin has altogether 13 sleeps, with two separate rooms, a small flexible living room, and lofts. Polycarbonate fillings in the interior doors let light seep through.

An existing cabin of 29 m2 now functions as an annex, and together with the new cabin creates a sheltered outside space.The main entrance is placed toward the dominant wind-direction, to keep it clear of snow which will accumulate on opposite side of the building, so the windows here are placed rather high up on the wall. The blocking wall at the bottom of the west facade, in front of the cabin, prevents sheep from getting in under the building. The eaves are generous to keep frost, falling from the sky at night, away from the windows - which can be a problem with insulating glass at certain temperatures. As no windows open, the eaves also conceal openings for ventilation. 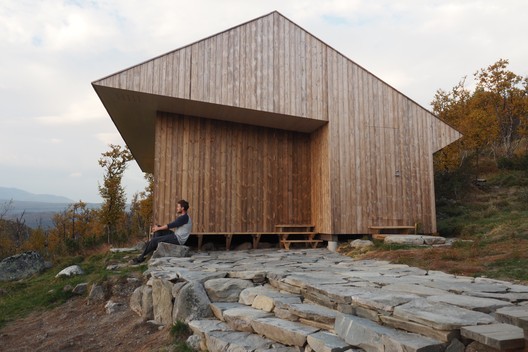