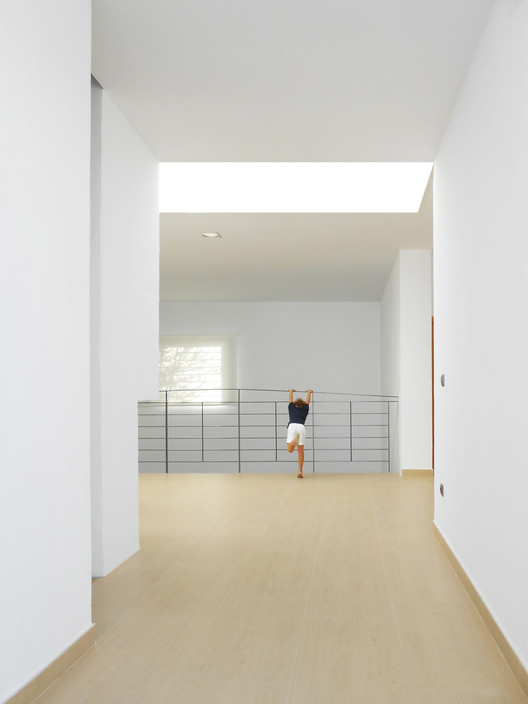 Text description provided by the architects. A vertical surface -on the left side-, standing out respect to the other one, gathers and exemplifies the long and raised aspects which are drawn from the Almonte’s tradition. The other surface -on the right side- assembles horizontally and oblique elements of the modern culture. A soft displacement of the main surface emphasizes the vertical dividing line between both &#39; styles. &#39; A great folded beam avoids beasts getting through, allowing to tie them. Moreover, its flat top makes possible the support of the gintonic of the horsemen who always visit us...

The element on the left side, being higher and slimmer, is characterized by the presence of two large vertical windows. The right one accentuates its horizontal position by means of the use of dark ceramics, which extends the window vains up to be superposing...

This Project works to found the resulting air between two main parallel volumes ‐night and day areas‐which are both relocating to define a new large entrance hall ‐in front of the street‐ and a new open courtyard ‐towards the street behind-. The chimney, as a motor of the inner double-height space, takes on the leading role of the scene, and it is going to be around esculpted to materialize an ascending stair. I admit that my memorial traces, from my exploratory drawings about the Venturi House’s chimney, have come up again to be transformed. On the first floor, the chimney is unfolded towards an opened library that is illuminated by a lineal skylight located behind the chimney-stair.