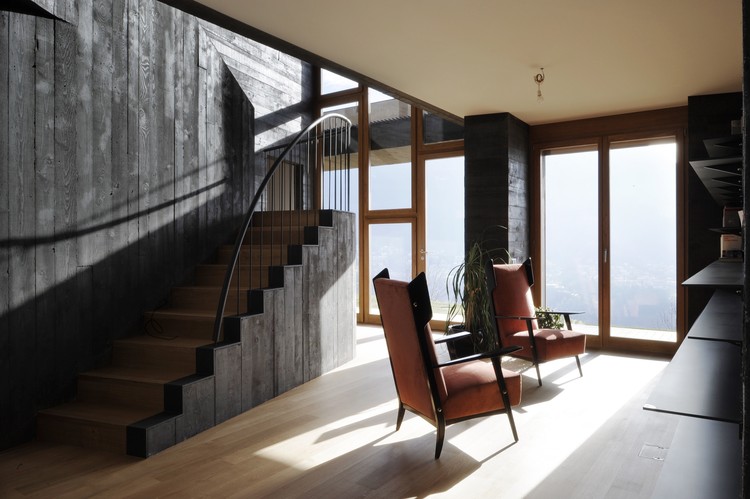 Text description provided by the architects. We we’re called upon to project this villa which rises out of an enchanting little corner, on the hills that pose as the crown of Lugano, a Swiss-Italian city which boasts a breathtaking view stretching from the Lugano Lake itself, to the mountains of high Capriasca.

The criteria and materialization of its insertion were objects of long reflection.

The peculiar morphology between terrain and orientation – naturally towards the lake – convinced us to design a compact block shunning its dorsal access, remaining completely open on the remaining three sides, prioritizing the panorama.

Conceived as a monolith, the giant solid mass was subsequently excavated where revealed necessary to sculpt the voids designated to inhabitation.

Upon much consideration and pigment sampling, the choice of color to clothe the concrete skin was black, cased in very rough-grained wooden boards; not only for the facades, but to excavate the inhabitable voids as well.

Attaining such result was no simple feat; it was only possible through extensive collaboration with chemical engineers and other competent specialists in material manipulation. Thanks to everyone’s efforts, after many attempts, we achieved the desired result.

Despite material opacity, the large openings allow abundant light to gently invade its interior, and diffuse throughout.

The sculpted staircase purposefully accentuates the excavated atmosphere of the large mass.

Special attention was given to architecting the landscape, which, thanks to the great sensibility of our designer exalts our choice of backdrop, drawing attention to a solitary immersed in greenery.

The villa, completed in 2013, is inhabited by a family of four.