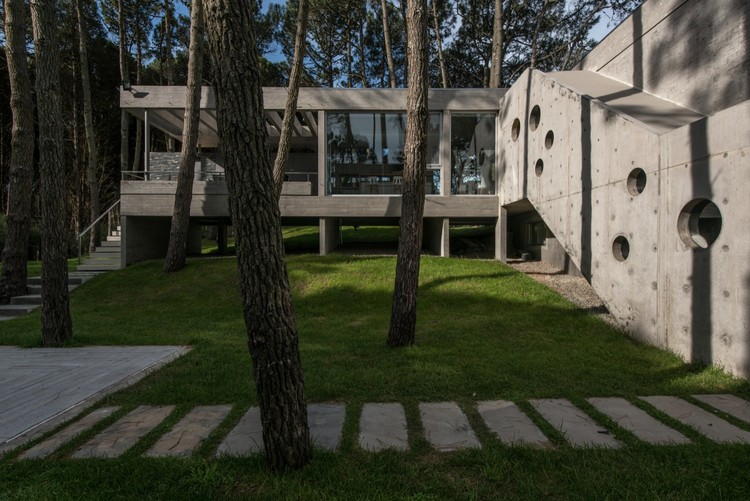 Text description provided by the architects. Kuvasz house is set on top of a dune in the forest of Carilo, an area with few neighbors in front of an un-plotted forest reserve.

The house was planned for the owner’s use during low season and for rental in high season. Practical requirements were set: amount of bathrooms, bedrooms, services, and other basic items for an unknown user.

From a conceptual point, Kuvasz was designed as a path that accompanies and rises to the sand-dune, touching the lot in a few spots, respecting and highlighting the current topography. The path ends in the social program, as a lookout resting on the crest of the dune.

Between the street level and the house’s main level, a connection is made by an inclined perforated sleeve.  The greyness and coldness of the material mingles with perforated circles of framed landscape.

As a game of opposites, the stairs sleeve first rejects the landscape, only to then empower it.

The house dematerializes in its interior-exterior transition. The roof slab turns into a pergola and slits open the lateral enclosure allowing sunlight and views of the outside; the wall does not reach the floor, transforming itself into a bench and opens as a mouth, creating a transitional space between the house and the forest.

Materiality and the use of natural light as a resource

Architecture is connected to technology, but is also connected to phenomenology, the sensorial elements and the context in which one works with.

The light, the game of shadows, the reflection on different surfaces and textures, they transform the architecture from being static into something dynamic.

Kuvasz was designed for a user; the house is the result of an intersection of variables based on people and their relationship with the environment and not as an object intended to be admired. 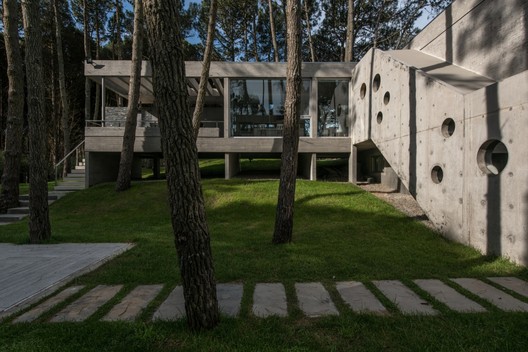