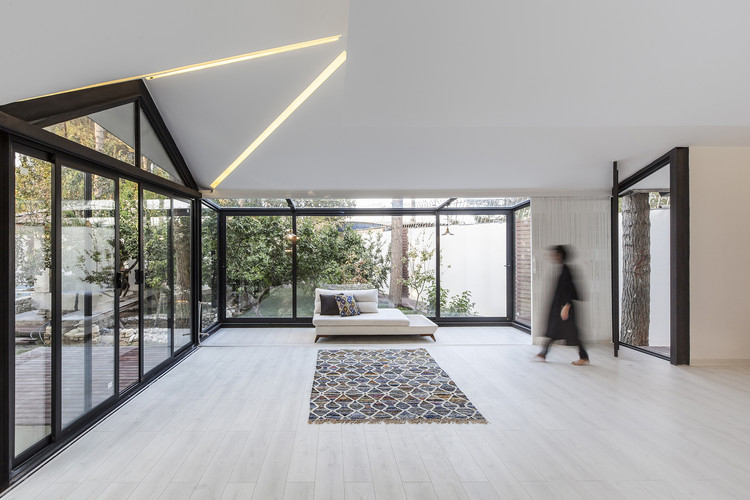 Text description provided by the architects. The project of Thirty-pine Villa was redesigned and reconstructed through anastylosis in the countryside of the city of Esfahan, Iran. This project consisted of an open landscape and a small construction within.

The building was not in concordance with the landscape of the garden in terms of dimensions and visual aspects and, therefore, did not meet the employer's demands for an appropriate hospitality for the parties and symposiums.

The design strategy of the landscape of the garden building was to pay full attention to the nature and, more importantly, to preserve the life and privacy of the pine trees.  The project was thence named Thirty-pine Villa.

The number "30" is a significant number in Persian mythological literature. Hence, famous Iranian mystics and poets have written legends on the basis of number 30, the most famous of which is the story of Simurgh by famous Persian poet, Attar of Nishapur, where the moral of the story is the rule of trust among 30 creatures of the story that ensures their survival.

As of the story of Simurgh, we also considered each of the pine trees as an entity living in the garden; hence, we did our best to modify certain conditions for the trees to let them relieve from the overwhelm of the building materials and to make a circulation path for the garden and, at the same time, connect the garden and the building to form a fluid circulation in the landscape architecture. This way, we could make suitable and harmonious paths along the garden from the garden gate to the building. Therefore, the myth of Simurgh and the story of thirty birds were adapted not only for the number of 30, but also in the application philosophy of the atmosphere and life space in the architecture of 30-pine villa. The outcome was a pleasing combination of the trees, the interior design, and the myth of Simurgh, which, as a whole, became an influential totality.

The designing process was initiated by spatial design of the environment where the 30 pine trees were living. The pine trees were prioritized and were fully considered. All the paths and traffics were directed towards the trees. The paths, intertwined among the pine trees, made the spatial structure and traffic in the garden. The inappropriate primary lines were subverted and new appropriate environmental spaces were thus obtained; cozy spaces for solitude, personal contemplations, twosome dialogues, children playgrounds, spaces for family parties in the center of the site, etc.

The environmental design lines for flooring were of two types. First, the lines adjacent to old walls that continued among the columns there. These coarse lines with 90 degrees formed one side of flooring. Second, those lines that reduced the width of the paths as they continued along the connection of the pine trees and reacted towards the trees and also reduced by a fracture which was based on the dimensions and sizes of the bricks and this way the pine trees were separated from farming areas. Such a composition let the beholders experience unique and appropriate perspectives. 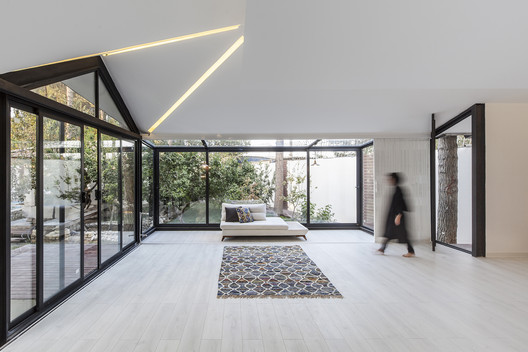