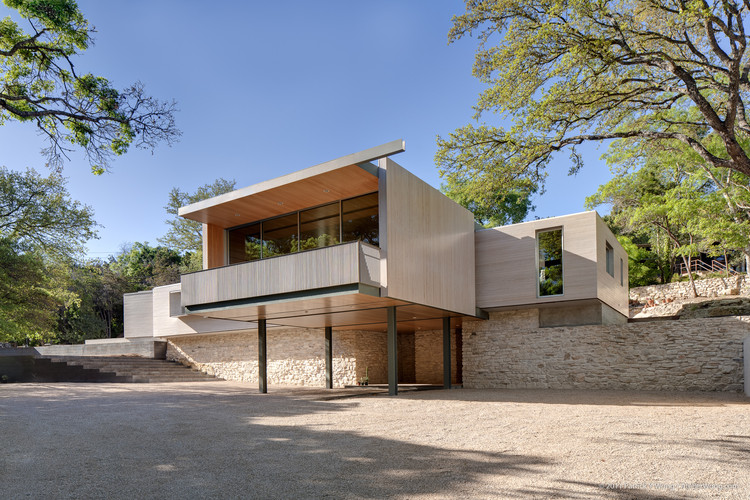 Text description provided by the architects. Balcones house is perched on the edge of a fractured limestone cliff, which is a part of the echelon of the Balcones fault. Rooms look either downhill into the tops of trees in the ravine below or uphill into the rock gardens behind the house. We rebuilt and reconceived a house originally on the site, designed in 1957 by Jonathan Bowman. We kept the site strategy of the original house, as well as its limestone rubble walls in order to maintain the modest Case-Study era scale. The house was redesigned and rebuilt with a steel structure and larger reconfigured window openings. Most of the windows slide completely away to one side, allowing direct connection to the outside. The airflow up the hill draws air through the house in most months. While keeping the proportion of the original, we added square footage tucked behind the house. The new house on the old footprint has an intimate scale, and is lined in straight-grain pine. The new floor area is built out in plaster and has a higher roof that twists to respond to the cliff and cups to collect rainwater. A continuous clerestory window between the two roofs lets in southern light along the length of the bedrooms and allows views of treetops.

We built the project acting as general contractor, with some support from a construction manager. This was a great way for us to get to know trades and craftspeople in Austin, and to try things we wouldn’t risk with a client. As designers making our own house, the question is really when to stop; it’s the proverbial labor of love. If I had to state a thesis about major details, it might be using metal plate against a variety of materials to make an edge. For example, a steel angle gives a sharp edge the concrete floor; steel I-beams are set into the wood ceiling as a groove; aluminum plates make a super-thin frame around aluminum windows; aluminum trims the slot diffusers set into wood and plaster.

We like to use intense materials to bring tactility to our modern spaces.  Many materials were designed and developed specifically for this project by our firm. For example, the quarter-sawn pine boards were sourced and milled locally; a gravel-cast concrete topping slab was developed as a warmer, less expensive version of terrazzo; and insulated tube skylights we fabricated. The concrete cladding at the front door was designed and molded onsite. Firm partner, Michael Young, had positives cut in plexiglass using CNC-milling, then made rubber molds from which multiple units were cast. The effect created amplifies light coming down from the skylight above.

Product Description. A major emphasis of the firm’s work is the connection between indoor and outdoor spaces, and the introduction of “good light” to the interior. In the Balcones House, the selection of the windows and doors was important in making this connection. Larger slider doors along the main living space bring in ample natural light, and also allow the entire wall to disappear. When the doors are open, the room doubles in size as the outside patio and interior living space are joined. Additionally, doors were used in some places to achieve an oversized casement window, maximizing light and also allowing fresh air to be brought inside. 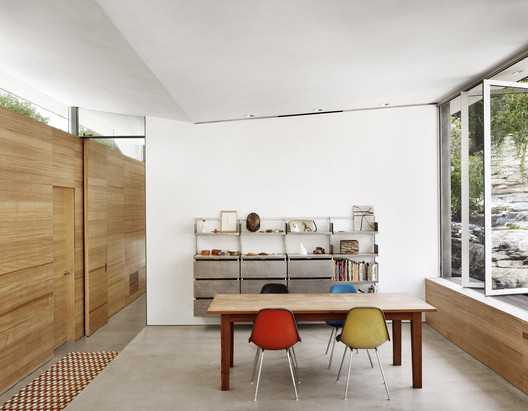