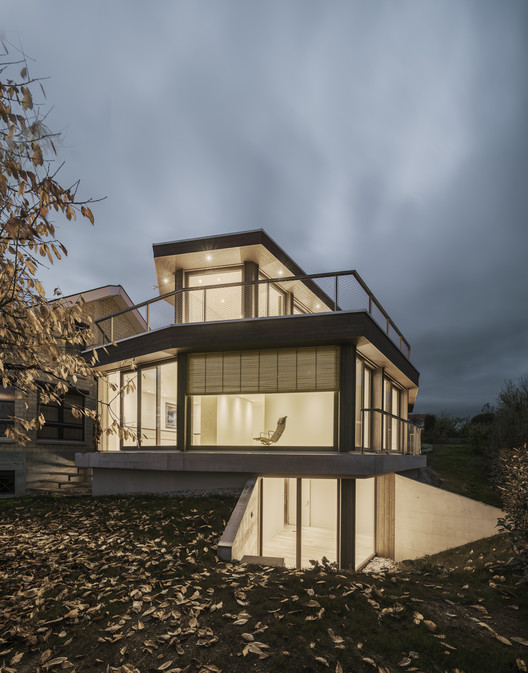 Text description provided by the architects. The new single-family house was designed as a separate residential unit and can hold its own next to the existing building from the 80s. It is situated on a partly raised plateau in the south-eastern part of the property. The two buildings differ in their roof design and thus emphasize their autonomy. At the same time, the new building paraphrases the existing building’s design: by its polygonal ground plan, which follows the hill’s shape, and expressive cantilevered floors. Wood was used a material to contrast the rather heavy sand-lime brick of the existing structure. Hierarchically, the new building is supposed to subordinate to the existing building and is therefore set slightly to the rear of the site. The new structure appears like a pavilion and, thanks to the flat roof, has a large accessible roof terrace that expands the small plot effectively. The greening of the roofs is intended to give the new building an animated character and link it with nature and the hill.

The entrance / access is from Titlisstrasse, past the existing building. Between the two buildings is a greened pergola that acts like a buffer zone and brings daylight into the buildings. At the same time, it serves as an entrance zone for the new building. The space allocation plan in the new structure comprises living rooms / bedrooms and a kitchen / bathroom each on the ground floor, and a living room on the first floor with a spacious roof terrace and greened roof; the basement contains a guestroom with direct garden access, sauna area as well as a cellar and a laundry room.

The dual materiality of the structure (above ground in wood / basement in concrete) is mirrored on the inside by wood ceilings on the ground floor and 1st floor as well as an exposed concrete ceiling in the basement. The walls painted in neutral white mediate between the materials.

The large-scale glazing in the south and west creates a connection with nature. Circumferential canopies integrate the sun protection and underline the number of storeys; on the ground floor, the cantilevered canopy becomes a carport. The vertical inverted formwork of pre-greyed larch contrasts with the horizontal ceilings and provides the closed facade with plasticity and an exciting play of light and shadows.