Architecture and urban design firm, Farrells, in collaboration with AECOM, have won the competitive tender to design the Singapore terminus of the new Kuala Lumpur-Singapore High-Speed Rail.

Sited in Singapore’s “futuristic second Central Business District” of Jurong Lake, the design was conceived as a new civic landmark and a part of the district’s new master plan currently in development by the Urban Redevelopment Authority and a team of consultants led by KCAP Architects & Planners.

While the railway station’s platforms are located below ground, the design aims to create an above-ground focal point that will mark the station as a new international gateway to Singapore.

The High-Speed Rail terminus is touted as a game-changer for Jurong Lake District, envisaged as Singapore’s second Central Business District and a ‘District of the Future’–the new station will drive international exchange and growth there, said Farrells director Stefan Krummeck. The majority of the station structure is hidden below ground, so we felt it crucial to mark the station’s presence as a focal point and catalyst for the success of the district with a sculpted and elegant station hall.

Inspired by Singapore’s reputation as a Garden City, the station’s roof will feature skylights to create natural lighting and continuity between interior and exterior space.

In addition to the Singapore railway station, Farrells has designed other large high-speed termini, including the Beijing South and Guangzhou South railway stations in China, as well as Singapore’s Punggol MRT Station.

The overall Kuala Lumpur-Singapore high-speed rail project is expected to open by the end of 2026. 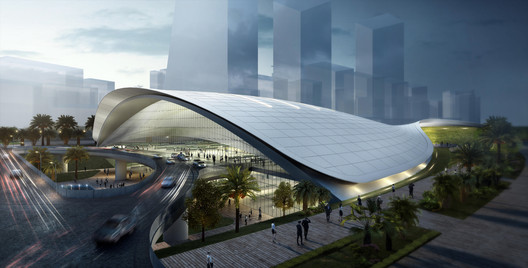