This article is part of our 'Innovative Materials' series where we ask architects about the creative process behind choosing the materials they use in their work.

The Museo Internacional del Barroco (International Baroque Museum) by Toyo Ito is located 7km from Puebla, Mexico. The place is noted for its easy access, not only for cars, but also for being connected to a network of bike paths and public transport. In this interview we spoke with Alejandro Bribiesca Ortega and Miriam Carrada.

What were the main materials used for this project?

AB / MC: Undoubtedly the most important material in the project was concrete, as it made it possible to bring Toyo Ito’s design to life, including its curved and twisted walls up to 15 meters high that lean up to 17° in places.

The construction system, specially designed for the MIB, used precast concrete walls and slabs that, in addition to being the structure of the building itself, give the final finishing. The slabs, composed of precast gray concrete tablets 7 cm thick, use recycled PET spheres to make them lighter; While the panels that make up the walls are formed by two plates of white concrete between 15 and 21 meters high and 36 cm thick that, once placed in place, were cast with gray concrete to form monolithic sandwich walls.

What were the major sources of inspiration and influence in selecting the materials?

AB / MC: Whatever material we used had to correspond to the design of the building and make a single, solid unit. In other words, the curved and complex shape had to be made in such a way that the architectural elements were minimized as much as possible to create exhibition spaces of large clearings and express two of the basic concepts of design: fluidity and natural light and shading, respecting the height and angle of the components.

To do that, we looked for a material that let us make the structure of the building and, simultaneously, gave the final finishing. The system we used allowed to do that and at the same time bring down costs by using less white concrete in the structure.

Describe how the decisions made on which materials to use played a role within the concept design.

AB / MC: During the design process, many formal possibilities and spatial configurations were explored in order to arrive at a proposal that, according to the design team, best suited the needs of the project. The idea of ​​possible materials, in this case concrete, emerged throughout this process in which, by means of scale models and drawings, the shape was defined. The curves, twists and angles in components that were very tall and thin needed a resistant, malleable material that could be bought in Mexico.

What advantages did these materials offer during construction?

AB / MC: The use of prefabricated concrete elements offered many advantages over an on-site casting system. By using sandwich we reduced the amount of white concrete we needed by 70% and we were able to reduce the amount of centering by 50% by modulating the shape and using molds on site. Also the system allowed to optimize resources, to have better quality control during construction and assembly and to follow the project’s progress closely. But certainly the most important advantage was shortening the construction time of the structure to only 27 weeks.

Did you face any challenges due to the materials you’d selected?

AB / MC: While constructing the MIB with prefabricated concrete elements brought many advantages, it was also a challenge throughout the entire process, since this construction system had not been used in the country before. The first challenge was to industrialize the shape, so we needed to make a 3D model of the building and used it to accurately modulate the 55 walls to get the greatest number of equal panels without affecting the original design. From that model we got the different types of panels and their shapes, including all the gaps, spans, and installation steps since once they were manufactured, the panels could not be altered.

According to the design and modulation, the building was to consist of 701 panels that were between 15 and 21 meters in length and 36 centimeters thick and classified into three types: straight sandwich, curved-sandwich and solid curved mass of white concrete. We needed enough panels so that the four mounting fronts working simultaneously on the site were continuously covered.  We did that through a rigorous manufacturing program based on the use of 65 different molds specially designed for this project that let us make each piece in just 3 days.

Putting the panels of walls and slabs together to make one monolithic structure was perhaps the most complex process and required many tests before doing  any work on site. Once the topographic equipment was used to place the panels into their exact positions, casting had to be done in such a way as to guarantee the sandwich panels resisted the pressure from the concrete while covering all the spaces in the interior, because at such great height and between such dense steel we couldn't vibrate the concrete (to settle it into place). The solution was to make 2 to 5 meters partial castings with a thin, almost liquid self-compacting concrete that is easily distributed within the structure.

Was any other possible material considered for the project? And if so, how would the design have changed?

AB / MC: Once the design was defined and the offer given in Mexico, we only thought about using concrete thanks to  its strength, timelessness and malleability. Although the MIB was conceptualized to be build using concrete casts on site, changing the system didn’t seriously affect the design. Some adjustments were made like standardizing the curves and the dimensions of apertures in order to facilitate the mass production of the prefabricated panels.

How did you research and choose suppliers or contractors for the materials used in the project?

AB / MC:  Prior to construction, the MIB team explored different construction solutions available in Mexico. During that process of research and analysis the company we ended up contacting, Danstek, backed by Fapresa , stood out. They specialized in the construction of prefabricated concrete and showed great interest in the project and made a mock-up of one of the panels while demonstrating its production capacity to meet the project’s demands within the required time and most importantly, emphasized their willingness to collaborate with the team to design the best construction solution for the building. 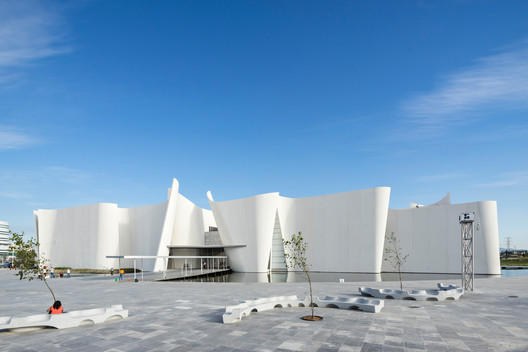