Save
Studio for Two / Studio Wood 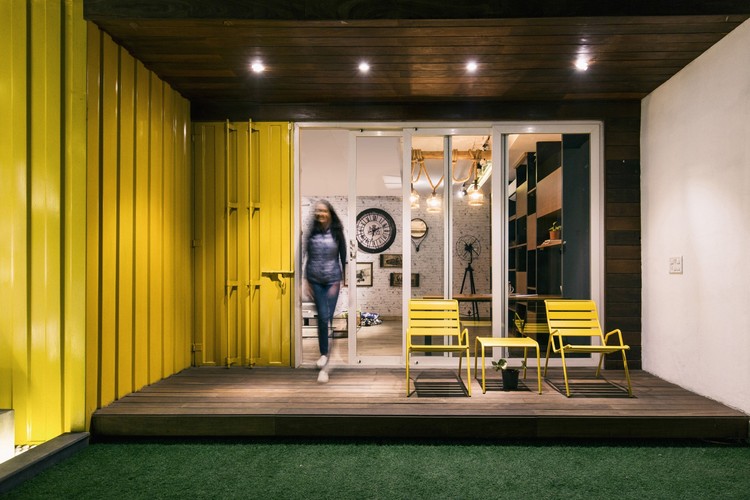 Text description provided by the architects. In the year 2016 Studio Wood was entitled with a unique brief to design a light weight temporary structure atop a roughly 1200sq.ft apartment. The construction needed to be limited to a certain weight and was constrained by a tight timeline. After a few days of brainstorming the team proposed using metal girders and trusses to form the exoskeleton and mild steel panels refurbished from used shipping containers wrapped around the envelope.

To begin with a grid of 150mmx150mm vertical and horizontal I beams were laid on the existing terrace floor to raise the floor height. This was done with the intention of giving the room a floating effect and to avoid rainwater percolation into the structure. The outer walls took support from the floor grid and a sloping roof grid clad with Trafford sheets was put in place. Since the structure was built on the terrace the ceiling plane was exploited as much as possible for daylight and natural ventilation with a provision for two skylights varying in width.

Having young entrepreneurs as our client’s the aim was to bridge the dichotomy of a work space and a place for rejuvenation by designing a multi-purpose work studio by day and entertainment hub by night.

The space was divided in 3 zones, Open outdoor area, the semi-open portico characterized by the wooden decking and the closed cabin.

Entry to the cabin was marked by a 3 part sliding UPVC glass door allowing for a seamless integration of the interior space with the exterior. The semi open cantilevered deck clad with wood gives the space a  cabin like feel and is the perfect place to enjoy a cup of tea in the morning.

The landscape was riddled with several playful features including a swing and multipurpose cubic blocks installed at varying heights. These structures could be moved around in linear fashion to create a new identity each time.

Perhaps one of the most challenging features of this project was to design the sliding door for the outdoor bathroom. The 10ft high door had to be designed to slide smoothly despite its heavy weight. This feat however was achieved by using ball bearing mechanisms predominantly used by automobile manufacturers to ensure a smooth transition from open to closed state.

Another prominent feature of the landscape was the multi-level feature wall.  We constructed ladder like elements in mild steel and placed custom-made fibreboard planters at different levels. With this technique, the greenery was not only the part of the floor scape but also an entire wall.

The interiors were designed to echo the concept of modularity. With a simple push the sofa could transform into a bed or continue as a comfy 5 seater.

The design was born keeping in mind orientation, climate and comfort. Apart from the built up area the terrace landscaping was also undertaken which involved designing a controlled microclimate using plants, water bodies and sunshades. 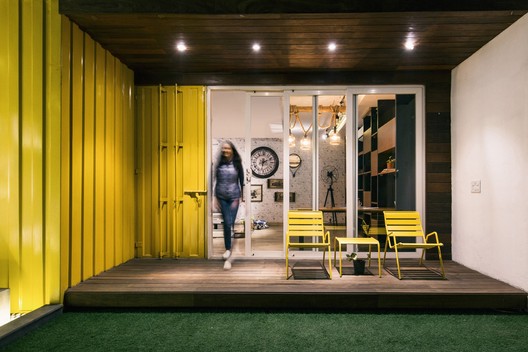