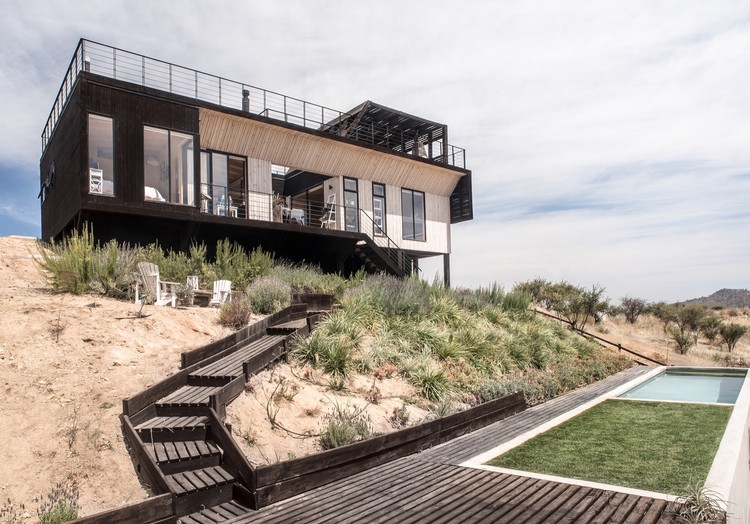 Text description provided by the architects. The project is located near Lake Rapel, on a site of 896.5 sqm. This is characterized by a privileged view of the lake and a strong slope in most of its development. The budget forces to minimize the intervention in the slope, containing the largest amount of program in the minimum of flat space available at the beginning of the site. This, together with the high temperatures presented by Rapel's microclimate in summer, implies the following problems: high program density, excessive solar radiation and lack of comfortable space for recreation.

The methodology for dealing with new projects arises from the following disciplinary concern: the program is resolved in an intentionally neutral and generic way in SIP, for then to solve all the architectural problems through just a single operative element. This element, which in each project takes a different form and function, is understood as the main operation and is transversal to all the proposals of the office; giving them a uniform character.

The resolution element in this case is the plane, which when folded generates a space of mediation between the common areas, protects the interior of excessive solar radiation and enables a large space for recreation oriented to the main view on the deck.

During the hot season, the fold generates an eave that protects the house from excessive solar radiation, allowing to privilege the main views without generating overheating. This strategy is combined with the use of a double ventilated wooden façade - both on the walls and on the roof - avoiding the overexposure of the envelope to direct radiation. Finally, the south windows are mirrored with the ones on the north and a central patio in shade, which favors cross ventilation and keeps the interior temperatures comfortable.

During the cold season, the main eaves allow the entrance of radiation to the interior, which combined with high levels of insulation and elimination of all possible thermal bridges in the envelope, allows the small wood stove to be needed only during cloudy days. 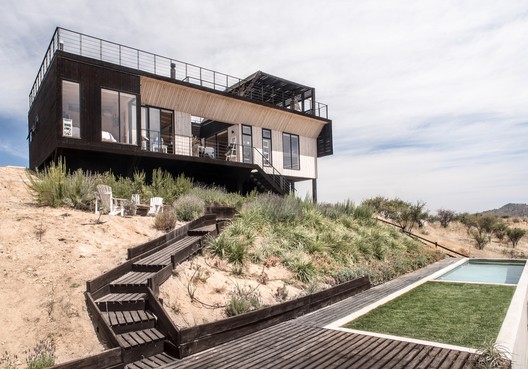