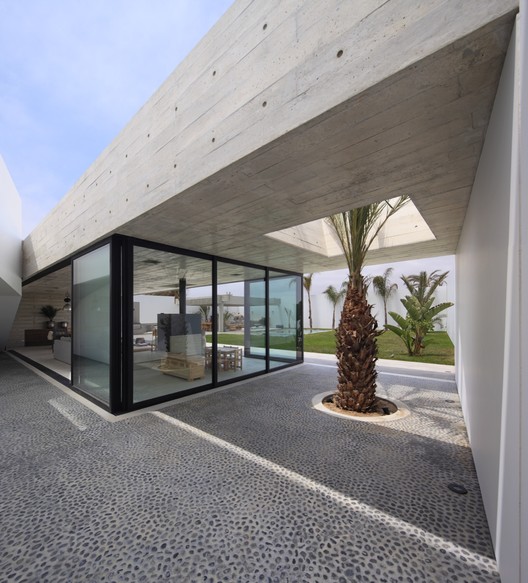 Text description provided by the architects. South of the bay of Paracas, there is still a neighbourhood that allows to walk along their streets and to maintain a community life. We are able to find there traces of the old houses that generate a domestic scale border in a surrounding silence.

This project takes place in the second row from where it tries to focus the view to the bay through an opening on the urban structure between the existing houses. According to this, it is orientated to the north and creates patios that are born from the mass subtraction in the second level which direct the view to the see protecting the interior private spaces from the vehicular flow on front.

Based on the circumstances of his location and from the disciplinary interpretation of the program and its elements, the form is generated. The architecture of this house is articulated by two different buildings that create two different moments at the same time. The first one articulates the city through its urban scale and gathers all the dormitories and the service areas of the house. This area is developed from elevated patios over the pedestrian scale that allows to open to the north directing our vision to the ocean, keeping a formal and material austerity. The function of this building is to serve and contains the main part of the program. It is crowned by spaces on the third floor that foment the familiar encounter being the only place where two confront directly with the ocean view and the surroundings.

On the other hand, a building / a space of shadow confines the social activity of the house in a big independent concrete cover, joined only by a stair which connects the public space with the resting and private areas. This structure gives us shelter and silence. This environment is created by the rough materiality of the cover, with perforations that allow the filtered and punctual entry of zenith lightening which soften the pace from light to shadow.

The project takes special care of the way it makes contact with the street, from the abstraction of the figure to the relation with the interior of the house across an entrance yard. This patio permits your way into the house passing through a hanged staircase showing a weightlessness, generating a threshold in relation to the street, a patio deconstructed from the light of Paracas.