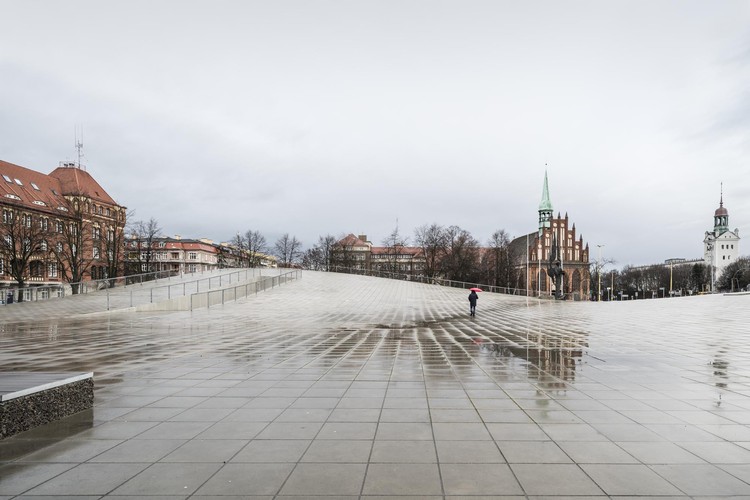 Text description provided by the architects. Szczecin is one of the largest victims of historical violence in Poland. Until 1945, the city lay within the borders of Germany, after which it was suddenly incorporated into Poland. Instant exchange of its population deconstructed the social fabric and distorted the city’s identity. Before the war, the current Solidarności Square was the showcase of the city, featuring a quarter of representative tenements, enclosed by the Konzerthaus in the North. During bombing raids of the Allied forces the quarter and its vicinity ceased to exist, creating a gap in the urban tissue. Furthermore, this fragment of the city was cut through by a transportation route. This quasi-square became the arena for worker protest in 1970, which was brutally pacified, and 16 protesters were killed. From that moment on, this place became a symbol of fight for freedom.

For years, the Solidarności Square had been a square by name only – with vague borders, open frontages, burdensome busy street neighborhood and the absence of a defined function, despite the dominating one – to commemorate the events of December 1970, where the place was provided a monument in 2005. In the 21st century, the area became the arena of significant architectural interventions. In 2014, the former Konzerthaus was replaced by a new philharmonic venue designed by Estudio Barozzi Veiga. The building became the new city icon, winning the main Mies van der Rohe award in 2015.

The next initiative, which contributed to changing the perception of the space was the National Museum's Dialogue Centre “Przełomy”, devoted to the history of Szczecin. When designing the Museum we set our mind humble to the history of the place and the new city icon closeby. Thus, the idea to hide the museum underground to create a background architecture.

Two contradictory traditions: of a quarter and of a square were the point of departure for the design, an urban design hybrid which encloses the space as a quarter, while retaining the values of open public space. The flattened areas of the square create foregrounds in front of the philharmonic and the church. The quarter forms in oposite corners as elevated square floor. The one elevation houses the museum facillity, the other one is an artificial hill, closing up the urban interior and shielding it from the tumult of the busy street. There is no definite boundary between architecture and ubanism.

The architecture follows topography, hence the museum's form is a continuation of the concrete floor of the square which is covered with rectangular tiles. In the elevated corner these tiles gain 3rd dimension, becoming cuboidal blocks. The whole makes a monolith that transforms when the museum opens. Some of the vertical plates rotate, thus creating the arcades unveiling two entrances. The third entrance is determined by a ramp carved in the square's curvature. Ground floor is a square's extension and it functions as an entrance hall.

The exhibition space is hidden underground. When we go down the stairs the concrete ends and we submerge in blackness that is a background for the tale of Szczecin since the II world war, in a connection of what was happening in Poland and the rest of the world. Simultaneously with the historic exhibition, based on pure information, we add a narration spinned by artists' masterpieces – both, the works from long before the museum was opened, and the ones intentionally created for this venue. This kind of attempt allowed the exhibition to become wider and more universal. The blackness allows to focus on presented objects while giving the impression of an infinite space. This brand new formula for the exhibition makes a historical museum an art museum as well.

Before, the square was only to commemorate the history – as a result of redevelopment this part of the city became attractive for the other (remaining) habitants. Yet, its open formula encourages its users to express their impact. Artificial hills provide an opportunity for discovering new outlooks on the city, welcome walking tours and invite to sunbathing. The slanted floor inspires various activities: for skateboarders, this is the ideal spot to practice. In the winter, the square serves as a sled track. The yard has retained its symbolic dimension – the monument is still attracting veterans during annual celebration events – it is not dominating aspect after all. Today, this urban space is a place of amicable coexistance of different age and societal groups. 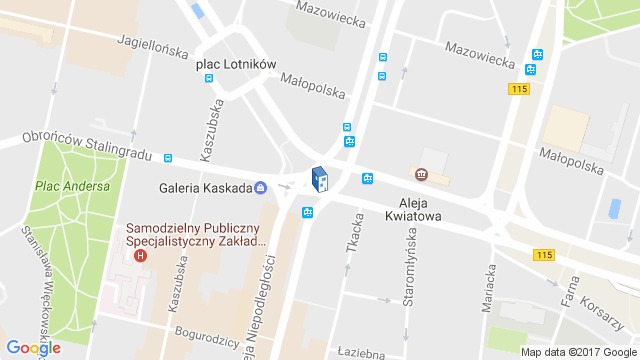 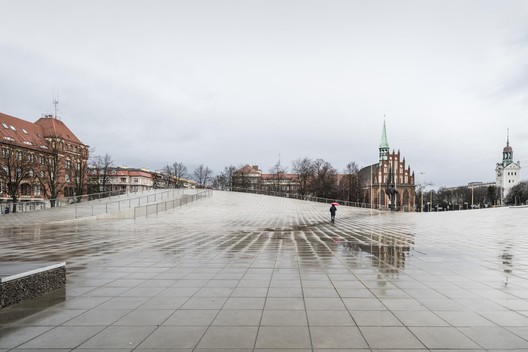