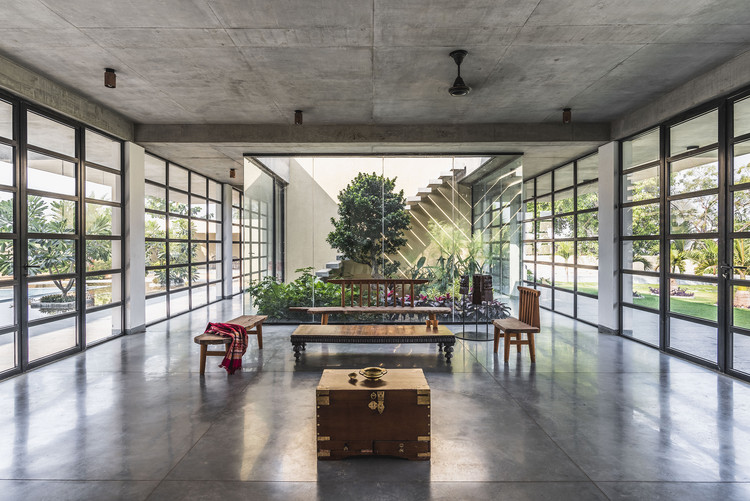 "Vanvaso means to dwell within nature and the design bullseye's the name. Situated in Vav village of district Surat, Vanvaso is a place of refreshment away from the city, and into the countryside surrounded by lush green patches of woods and farmlands. Vanvaso provides a peaceful environment, unlike that offered by a thriving city like Surat. It is a retreat from the routine hustle, a second home, yet one that makes the liver feel more relaxed and 'at home'.

The house has an urban touch to its exterior, with contemporary luxuries of the the modern day, yet it beautifully amalgamates the traditional spaces within. It comprises of typical Indian features like chowk, wall arts and murals, courtyards and connection to nature, an inseparable part of Indian architecture.

On site, a path is developed that divided the dwelling from the farmland. The structure is placed at the south west corner of the plot, allowing for party lawn and landscaping at the front yard. This gives privacy and calm environment to the house. Mounds and trees along the entrance avenue veils the structure and adds curiosity and element of surprise as one moves ahead on the path.

At the entrance a chowk welcomes the visitor, with large walls painted in worli art style and landscaped central region that defines the character of the space.

The house is designed by dividing the regions based on nature of spaces, giving a gathering space in between for interaction along with public and private zones on either sides. This forms Indian massing as that of village structures surrounding a courtyard; thus attaining the crux of the design.

The northern block is single storied with large openings, connecting to the landscape on both the sides. It comprises of public spaces - living and dining areas with a beautiful internal courtyard landscaped with a central bonsai tree. The large openings are shaded using overhangs and awnings that form the semi covered ottlas on both sides.

The spaces between the blocks are shaded by the southern block, that is higher than its northern counterpart. It allows the flow of cool south-west wind filtered through trees and a pool that leads the public area and activity space. It hosts a semi open deck with columns within the pool, connecting the spaces while hammocks and relaxing lounge flourish the deck.

A water body extension is added beyond the pool and into the gravels, giving the building and the landscape surrounding it a floating effect. Stone chips surround the water body and gives the effect of a dessert, thus the water body seems like an oasis. A meditation deck rests in this peaceful atmosphere.

The central courtyard contains an open staircase going to the upper floor of the southern block, where a semi open space develops the frame of lush green farm.

The front party lawn space is left open with few features like gazebo, sliding swings along with others. Landscape elements like bamboos, textured cladding, wall colours, lights and sound all add to the ambience and form of an Indian village space. The house thus turns into a home, with the little details creating a bigger picture, making the whole atmosphere much larger than the sum of its constituents." 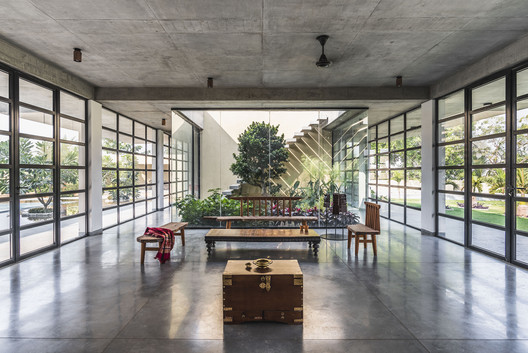