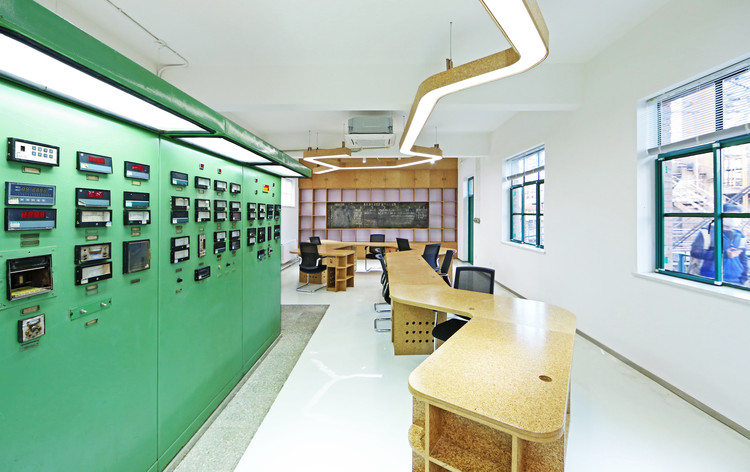 Text description provided by the architects. The office of 751D·park is located in the northeast of Beijing, which is transformed from adeclined gas plant built in 1954. The factory is one of the 175 focal state-owned industrial projectsimplemented in the socialist First Five-Year Schema.There was over 1/3gas supply delivered from this factory at that time. In the turn of the 21th Century, it became the agglomeration of creative industry in Beijing.

In an area of about 150 square meters, the new office is on the third level of a three-storey brick building, connected the footbridge system and the boiler area. Given the heritage protection policy that strictly prevents alterations of architectural appearance, the design maintains the general feature of the factory plant with new railings, doors and windows. It also adds additional two shear walls in the building center to enhance the structural stability of the old building.

The lighting is exclusively made, which echoes the design of working table in irregular linear form. The sculpture-like table and lighting not only create zones within the flexibly working area, but also provide a coherent order and lively cooperated environment.

To create more flexibility of the office space, the original partition wall was demolished so the entire space becomes a continuous one. The working area of the office director and pantry area are functionally separated through the division of new added shear walls. The north and south sides were designed as open working area, meeting room, bar, and the lounging area.

The southern part of the office is horizontally divided into a conference room and an upper-level small tatami area.The staircases in-between not only have storage function, and also allow the setting of a smalltheater, which provide leisure activities beyond working hours. Couple of seating areas is designed next to the bar. They are usually used for casual chat, and occasionally can be transformed into working table.

In addition to the new design elements, the history of the old industrial buildings has integrated into the renovation of the new office. The original large instrument box was transformed into the locker room and storage space after repairmen and repainting. The terrazzo floor below the instrument box was retained and polished. The center bookshelf accommodates a large number of historical documentsand archives. The retaining blackboard and chalk writing recall the old memories implanted from the age of socialist production era.

The extensive use of straw board greatly helps reducing cost and promotes the low-carbon and renewable material, as the entire project was completed in a very low budget. Complementing the minimal materiality, the application of straw board has also created a set of playful custom made furniture, lighting and spatial division, which is an exploration of the wide array of means for both designing and fabricating space. 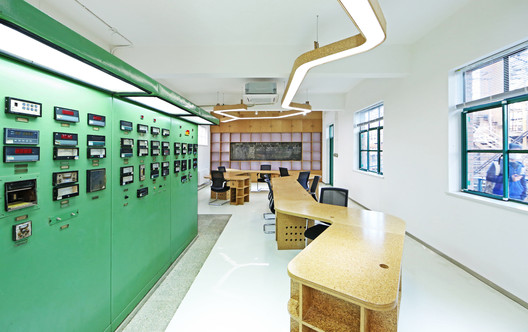